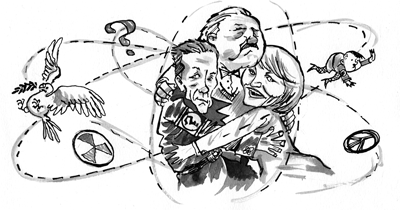 Frayn’s Play Is The Bomb

For many years that was the most widely considered shape of the atom, the image projected at students learning about the basic building blocks of the universe.

The Danish physicist Niels Bohr conceived a new model in 1913 in which a certain number of negatively charged electrons orbit a positively charged nucleus, and while this has been outmoded, its simplicity, and accuracy of the essentials makes it still a popular device today. Bohr also solved the energy puzzle of atoms, in that, as they spin around, electrons lose energy in the form of light, but nobody understood why they didn’t simply slow down and crash into the nucleus.

Using the single electron Hydrogen, the simplest of atomic structures, as his test subject, Bohr suggested electrons are held in varying valances or levels, and that as they shift down to lower levels they cast off photons, or uniform packages of light, but once they reach the lowest level they cannot lose more energy. They can gain energy, but there is a minimum they can’t breach, so atoms remain intact. For this Bohr received the 1922 Nobel Prize in Physics.

His work provided one of the foundations for Einstein’s theories of Special and General Relativity, and was also fundamental to the science that went into the creation of the atomic bomb. In fact, in 1943 Bohr escaped Nazi Germany and fled to America to work at the Manhattan Project under the code name Nicholas Baker. According to Bohr he didn’t do very much. His real purpose being there was simply so he couldn’t be under the thumb of the Nazis.

Robert Jungk’s book Brighter Than a Thousand Suns was an “account” of a famous, secretive, risky meeting between the half-Jewish Bohr and his brilliant disciple and ex-research partner Werner Heisenberg in 1941 in Nazi-occupied Copenhagen. Heisenberg is inventor of the Uncertainty Principle, amongst other things, and another giant of science. Jungk probably idolised Heisenberg to some extent, as his take is that Heisenberg had suggested a pacificist pact between the two scientists and friends that neither of them would assist either America or Germany develop such destructive madness as an atomic bomb. Jungk also posits that Heisenberg did eventually work on Hitler’s nuclear project but deliberately and courageously sabotaged the programme.

When Bohr read the book he vociferously and publicly claimed this was not the case. Heisenberg, much to Bohr’s dismay, had admitted then that he was helping the Germans with their bomb, and was confident the Nazis were going to win the war.

So what really happened that night? What did the two brilliant men discuss on that hour or so walk through the blacked-out streets of Copenhagen? Whatever it was, Bohr refused to speak to Heisenberg ever again.

Michael Frayn’s play Copenhagen is an adventure of the hypothetical what-ifs surrounding that evening. Refusing to lay down moral judgments, Copenhagen explores various themes, but one of the main thrusts is: Which is stronger, loyalty to Family, and by extension, humanity in general, or to Country, and by extension, one’s specific society?

Playing on the potent themes and images suggested by the poetic theories of these two physicists, whose work has reshaped the world for better and worse, Frayn’s script is widely considered one of the very best written in the last fifty years. The seemingly impenetrable fields of advanced particle physics (especially the wave/particle duality of light), Relativity, and the creation of the cosmos are explained with brilliant clarity without ever obscuring the very human nature of the story being told.

The Vancouver Playhouse are mounting Copenhagen, starring Brent Carver as Heisenberg, Victor Ertmanis as Bohr and Susan Hogan as Bohr’s wife Margerethe. So much of this show will hang on Hogan, as the commentator who will guide the audience through much of the issues of the play.

Also, a cool thing to know is there will be a panel discussion on March 8 between astronomer William Unruh, philosopher of physics Carrie Klatt, science historian Robert Brain and director Leyshon, moderated by Hal Wake. Students and under-25s pay $25, but there will be a pay-what-you-can matinee this Saturday (suggested donation $8).