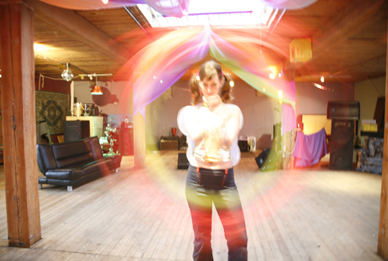 Noise, drugs, dancing, sex. Escaping the eighties to find ourselves in the 21st century with a hangover and the world in a worse state than ever. Pounding music embedded with electronic subtleties, flashing lights on thrashing bodies, chemicals and water churned into sweat and accelerated contact. The rave scene gripped North America, spread to Europe, and then returned evolved to spark new movements. This latest cycle of dance and music culture has continued, splitting into ever more fine ringlets.

Up in the Air Theatre’s latest production 120 bpm has been five years in the making – more, given that it is drawn from the lives of its writers and director. It tells the spiraling story of Hero, the uncrowned king of the Vancouver rave scene, Pixie, the Professor, those disturbing (and rather cute) Goth death ravers from Seattle, and newbie Foster from Chilliwack. They all descend upon a secret warehouse location to fling themselves into otherly states of mind and each other.

The play suggests it’s not so much drugs that destroys people as people who destroy themselves using drugs. If it’s not E it’s JD; any means of escape will do. The performances are deeply invested, and the actors seem to know where it’s all coming from. The problem with the play is that people who are stoned all the time aren’t that interesting to watch, unless you’re stoned too. The energy of the performances have that same desperate feeling of needing to maintain. There’s no other way 120bpm could have been done – it is flawed by its own sense of focus. However, there’s also some very funny jokes, and the charisma of David Patrick Flemming as Hero means when tragedy comes you honestly care. Actually, for people deliberately presenting themselves as 2D cartoon characters, the whole cast are pretty well rounded.

Unlike the 60s, if you were there in the 90s you probably remember too much. 120bpm is a snapshot of a time you might like to forget, but can’t. If you go see it, wait until after to fuck yourself up. There’s only so much room on the dance floor.