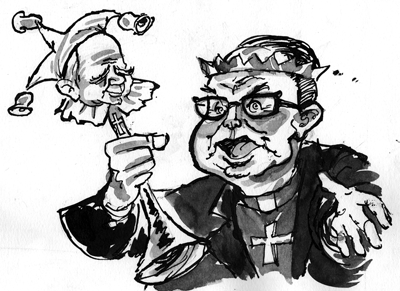 My mother is a Scottish immigrant, settling in Medicine Hat, Alberta with her parents when they de-mobbed after the war. The Hat, filled with likewise replanted Scots, English, Irish and Welsh, gradually over the years was built to reflect the substantially British mindset of its relatively small population, so that there are many similarities, in architectural style and lifestyle, to towns in the UK. Now, the surrounding area is a desert but the main industry in the Hat, so it seems, is golf.

Everybody there plays golf, teaches golf, is a golf pro, works on or near a golf course. Despite the place only having a population of around 80,000 it still managed somehow to financially support three entire golf courses. It is also the rattlesnake capital of Canada. A British town in a desert surrounded by golf courses and covered with snakes. There are so many scaly baby-rattles slithering around Medicine Hat the cafes sell rattlesnake sandwiches- thinly sliced, quickly fried, served in a bun with brown sauce. If you’ve ever wondered, snake is one of the few meats, along with rhinoceros, that doesn’t taste like chicken. Rattlesnake tastes like sesame seeds. Rhinoceros tastes like crocodile, which is probably a bad way to describe the stuff, since crocodile tastes like chicken. Regardless, my mother is Scottish, which makes me British— I’ve lived the bulk of my adult life there.

Discussions on the faults of colonialism aside, the British, wherever they roamed, left lasting influences. Canada has been built by many nations, but some of the earliest lasting foundations of this country were laid by the Scots and Irish fleeing the miserable living conditions back in Britain. The Maritimes are permeated with their colonial origins; the lilting accents, the architecture, the way of life, the very landscape itself.

The humour, too, of the Celts is obvious. Earthy and fantastical at the same time, riddled with obscure slang, and much of it shaped, even overwrought, by the Catholic Church. Humour and irony seem to flourish best where life is less than ideal, and life in the Maritimes has never been a milk-run. There has been hardship, eking existence from sea and rock, but there has also been community and a unique culture that hearkens back to life in the green isles.

Andy Jones is a burly Newfie comic who’s made a name for himself telling stories and ruminating on philosophical gobchaws, such as Cat’lic guilt, the meaning of an Irish God, and the deceptively simple joys of growing up in St. Johns. His Mad Priest routines have always suggested a subtext to me (one probably completely unfounded and based entirely on a Catholic priest I knew in Wales) of a man of the cloth afflicted with syphilis leading his terrified congregation to a heretical— but sincere— corner of Hell. Truth to tell, I don’t know whether his Roman digs will work here. I don’t really know Vancouver’s attitudes towards religion, and it is vital to Jones’ work the audience has some shared experience with the circumscribed mindset he plays against.

An alumni of Newfoundland comedy troupe CODCO, Jones will be performing his one-man show King O’ Fun at the VECC, playing the elected monarch of mirth as he embarks on a world-tour of hilarity in search of the ‘craic’. Philosophy, rambling anecdotes and sideswipes at the divine are pretty much guaranteed, and if he should be fool enough to volunteer a question and answer session afterwards, ask him about the snake rhino thing. He won’t know, but I bet he could improv some gems out of it. If you rifle the Zed TV website there’s a little clip about him that doesn’t really give you a sense of how funny he is at all, but Newfoundland looks very pretty.