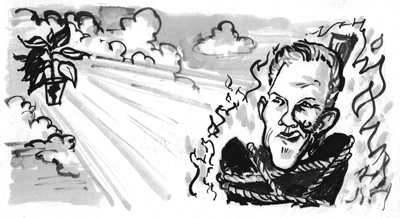 Leave a man alone with a rubber plant

Not so many years ago one-person shows were seen as indicative of the general sag in the theatrical industry pretty much everywhere. Huge casts and cumbersome sets were expensive, an extravagance only Big Glossy Musical Spectacolos could indulge in, and more and more companies were forced to produce smaller and smaller shows until they were left with just one person and a rubber plant on stage. Things have turned around since, but a discovery was made during that time and it has never gone out of style since. Actors discovered what stand-up comics have known forever— greater freedom of personal expression and production budgets covering little more than some rubber and a flowerpot.

Of course, Fringe Festivals have seen countless one-person shows as well. The beauty of Fringe is the possibility it allows for small scale, risk-heavy theatre and (relative) ease of touring. One-Persons have blossomed and even magnificent world-class theatres in the world happily programme such petite but bijou for their stage, and accordingly, solo festivals are now springing up everywhere.

The most natural horticulturists for a rubber forest in Vancouver is the First Theatre Space people who do the Fringe, and who will be holding the Stage One Festival of Solo Theatre. It’s a clunky name compared to Chicago’s Single File, Victoria’s Uno and New York’s Solo Play Lab. I can’t remember if London has such a thing, but they probably do, and with a snazzy name. However, the important thing is we have one too now, so there! I can’t believe it’s taken us this long. I’ve seen rubbers scattered all over the place in this town, and I find it difficult to comprehend why something hasn’t sprouted before now.

On the bill is Alex (Sensible Footwear) Dallas’ Drama Queen, Ben Ayres Sex, Drugs, Rock and Roll (written by Eric Bogosian), Jeff Gladstone’s Bouquets and Elegies: A One Man Musical, the return of John Murphy’s The Heretic (mark that one down, big stuff during the Fringe, last chance to see before they tie Murphy up and burn him alive) and Omar Sangre’s True Theatre Critic. Sangre is a polished Polish actor and I’m dead keen to see his interpretation of the vile, repulsive, oozing class of creatures to which I belong. I might heckle him. Sit in the front row dressed in black wearing a veil and a nosegay of cloying white lilies and I’ll take notes using a nail on scratchboard. I used to do a lot of that in the old days. Before 9/11 and the world-government x-raying at theatres for sharp objects. Oh well, at least I get to bring kindling for Murphy.

A little premature, perhaps, but you should start looking out for the Chutzpah Festival opening soon at the Norman Rothstein Theatre. The first time I covered this thing it was Enh/Enh (pinched face, see-saw gestures, eyes rolling loosely around my head—international symbols of come-see-come-saw (French)) but last year was terrific. This year’s programme is just one coup after another and I urge everyone to “Go Hebrew” for a week. Brian Sostek and Megan McLellan, whose show Trick Boxing was the crÃ¨me de la Fringe (more French) the year last and turned up again at last year’s Chutzpah are back with their new show. There is less chance of this show sucking than my head turning to broccoli. This is a No Broccoli situation. Also, Maxi-Mime returns, much ballyhooed; though I missed it I intend not to repeat that mistake. And other stuff. Go to chutzpahfestival.com. Lots of time, just keep it on your radar.
Last week to see The Electronic Bacchae at Open Studios. I may have been flip last week, but this is a seriously fun show/ club night/-thespo-archeological experiment and not like much else you’ve seen in this town. Go. Get drunk. Pray to your god. Don’t forget to tip. Return to the table. Drink. Dance. Get Greekified.