The Fringe Festival limps on 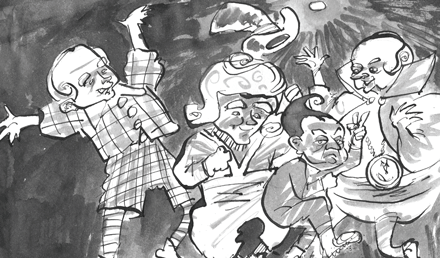 But now it can only get better Kirsten Schrader has resigned as artistic director from the Vancouver Fringe Festival.
[Cue Munchkins and Oompa Loompas dancing in the streets.]
Shortly before quitting she hired a new associate artistic director, David Jordan. Then, apparently on the advice of other theatre administration professionals, Schrader let go the Fringe’s long time business manager, Craig Laven, as part of a ‘restructuring’ of the beleaguered fest, swapping him for a contractual Certified Accountant. Laven has since been invited to apply for Schrader’s job. Jordan is serving as interim artistic director— by all accounts a decent, capable guy— and a part-time accountant has been hired, to give useful advice on managing their affairs.

So, business as usual at the Vancouver Fringe? Hopefully not.
Let’s play ‘Pictures’. Imagine the Fringe Festival is a boat. A very pretty sloop, with bright, multi-coloured sails, streaming flags and a daffodil chain strung between the masts. Tittering dolphins stitch the sea alongside the ship. Actors, dancers, clowns, musicians, Munchkins and Oompa Loompas are partying on board. Now let’s look at the boat. Let’s call the sails the boat’s Staff and Volunteers. They make the boat go. Let’s call the rudder The Artistic Director. She/He decides where the boat should go. And let’s call the hull The Business Manager. He keeps the boat afloat until it gets where it’s going.
Now, let’s take away the boat.

Last year’s Fringe, by all outside accounts, was poorly managed. Costs ballooned, and various stopgap measures were taken to solve avoidable problems. Numerous companies complained about their treatment and what they were getting from the Fringe for their $500-700 fee. Fundraising was not very successful. Pretty much every bridge to the greater theatre community was burned, and the tagline, printed on the cover of the programme, “Will the Fringe save Vancouver from mediocre theatre?” didn’t build any new ones. On top of that were Acts of God, such as the CBC going on strike, thus reducing media coverage.

As a result, the Fringe is now in the hole for $60,000. Actually, this is no big deal. As Jordan puts it, “The Fringe has always been in debt.” Under Michael McLaughlin, previous artistic director, the debt was worked down from $55,000 to $5.000. Then last year it swelled to 60K. Jordan’s point, though, is true. Debt, in our pretty picture, is merely barnacles and whatnot that collect on the bottom of the ship and must be periodically scraped off. If ignored too long it becomes dangerous, but on the whole it doesn’t stop a ship from sailing. The captain simply makes for port and careens the hull. However, forget this ship hasn’t a hull— at the moment it don’t have even have a port.
Currently the Fringe is in negotiations for a new, permanent home. After years of staff feeling sick it was discovered that having your office connected to a public garage was bad for your health. Carbon monoxide and worse fumes were flowing straight from exhaust pipes into people pipes. It must have been like breathing air from the year 2050.

Consequently the folks were obliged look for a new home. On Granville Island, however, rent is paid in gold bullion and first born children. Jordan is confident a sparkling new port will be secured, but at what cost?

The 2006 Fringe will be brilliant, because of the brilliant people here, and who come here, to entertain us, but it is going to be a compressed one. Slightly fewer shows in much fewer venues. That’s not counting the Bring Your Own Venue productions, of which there can be as many as apply, but given that this group had the most problems last year, perhaps the shine has gone off being a fringe Fringer.

As for Schrader, she’s off to “do some other things.”
[Cue Munchkins and Oompa Loompas dancing in the bellies of dolphins.]