Men of the world 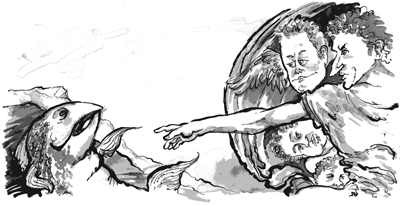 EVOLUTION is serendipity with teeth. It’s happenstance with a growling stomach. It’s an amoeba with a mortgage. From time to time, over the course of a million years, need meets niche and ferments into a new life form. Beneath my bed, for example, various breeds of lichen and fungus co-exist and network, a faintly phosphorescent multi-cultural civilization of furry slimes that inter-communicate in a lingua franca of pungent odours.
But on to cleaner things.
Up in the Air Theatre is another, more wholesome yet equally ambitious creature, shaking off its tail and learning to drive a stick shift. Co-artistic directors Daniel Martin and David Mott, having nailed down two fantastic Walking Fish one act play festivals (a third in June, 2005) are forever finding new ways to explore workaholism. Next up is Men of the World, a play written by David Geary and Deborah Wilton about an idealistic newspaper journalist seeking truth in a world of karaoke, sex and singledom. As near as I can tell, journalism is about booze and bumming fags, but even cheap theatre hacks can learn something.

David Mott: What Walking Fish has done is connect us to a network of artists. We can now ask ourselves, “Whom do we want involved with such and such a project?” and we are connected to this creative machine.
Daniel Martin: We don’t feel there’s a lot of opportunity out there for new writers, actors and directors. But we have this process of bubbling and stewing possibilities in which we invite artists to take part in a series of workshops and we bestow upon their ideas our energy and resources, then move this into a more traditional structure, creating a very collaborative original work.
Mott: Another thing for Up in the Air is creating theatre for people who aren’t theatergoers. Works that are intelligent and well crafted for folks who don’t really go to, say, the Arts Club, but are into art, live music—
Martin: Our world is an internet/movie/theatre world. Folks who didn’t grow up in Europe, theatre is not a natural part of their vocabulary. We attempt to subvert culture using standard theatrical practices so you might think you’re watching a theatrical sitcom, for instance, if all you’re looking for is entertainment, but if you want to glean something more you can find it.
We discuss numerous things, including their show next year, Greenbird The Parrot, a buckswashling “Malapropism in One Act”; the “Naked Man Cover” on Only #3; and the general lack of full frontal male nakedness in the world.
Martin: There’s nakedness in Men of the World.
ONLY: Really?
Martin: But we avoid any gratuitousness.
ONLY: Oh.
Martin: None of this lounging around naked like in the movies. But having said that, I want to know: in movies, on television, after sex when people get out bed and they’re in their underwear—Where did they get the underwear? I can never find my underwear!
I ask them where they see this whole Walking Fish thing moving towards.
Mott: Well, we’d like to build Walking Fish into a strong infrastructure that will exist independent of us… then give it away. In five years we won’t be “emerging artists” anymore. We’d go to a bunch of younger artists and say, “Here’s a company, it comes with $10,000 in grants, or whatever…”
Martin: “…It’s a lot of work…”
Mott: “…It’s a learning process…” And they would be the next generation.
Martin: Another thing: through the Fringe we met a bunch of companies, doing really interesting work.
Mott: Like Ribbit Theatre, and FDLT [Foqué Dans la Tête] who did JOB: The Hip Hop Musical. We’re interested in Canadian work that can travel the country—we’d like to do presentations of the best of what’s out there.
Martin: The Fringe is great, but it’s also just the Fringe. We want to see a cross-Canada network of companies with the same ideals as us. Screaming Flea, Seventeenth Floor, etc. We are not communicating, us indie companies, and we need to be. That’s the future.
Men of the World, a new comedy from Up in the Air at Studio 16, 1555 W7th Ave, Nov. 18-28th, , 604 257 0366