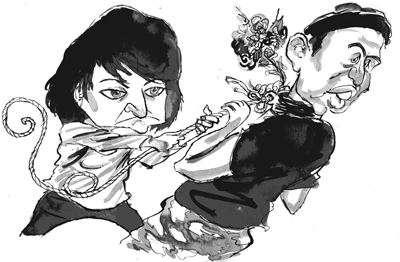 A theatrical companion to the US election
By ALAN HINDLE

You can lie to everyone but yourself, the saying goes—but it ain’t so. Lies are what we tell in order to survive. The only true lie is saying, “I never lie”.
The American elections just gone are a case study in self-deception. Bush, lying with near-Nietzschean Superheroism, has invented two wars for the sake of oil, fostered thousands, perhaps millions of potential new Middle-East terrorists, reversed a five trillion dollar budget surplus to a five trillion dollar deficit (openly giving those trillions to his rich friends), and polarised an entire planet against America. Yet slightly more than half the electorate believed the War on Terror Bush created to capitalize on 9/11, and against all evidence felt safer having him remain in power. They even believe Osama’s last minute video was intended to dissuade them from voting Republican! On TV Americans are shrugging,“thank goodness we got a result this time without a struggle! Now we can get on with our lives…”
People believe lies because it’s easier than digging for the truth. People will make the effort to fight discovering the truth because at a certain point, when the pressure on the bullshit dam threatens to burst, even touching the sluice will unleash an explosive deluge washing away everything they’ve known.
A couple days ago David Bloom, co-artistic director of Felix Culpa Theatre Company, let me sit in on a rehearsal of The Monument, their upcoming co-production with Rumble Theatre. Written by Colleen Wagner, Monument won the 1996 Governor General Award for Theatre, yet it has never been produced in BC. Probably, Bloom told me, because the stage directions and element design are so demanding to properly tell the story. On the other hand, this is the first Canadian play ever produced in China, so somebody should probably have done this show here before now.
The play is about Stetko, a soldier (played by First Nations actor, Stuart Pierre) accused of raping and murdering a score of women in an unnamed, war-ravaged country, being interrogated by his captor, Mejra, (Linda Quibell, also co-director of Felix Culpa) the mother of one of his victims. Mejra is the master yet also represents the victims of war; Stetko the enchained slave, yet also every war criminal. Wagner has stated the play debates whether the wounds of war can ever be healed by love and time, and also that every war crime contains the generational seed of reciprocal retaliation. For myself, viewing Scene Five in rehearsal, it struck as equally apt the question of how and why we lie to ourselves to justify or even ignore the evil we do.
Why did Stetko commit such terrible acts? How does he live with himself?
“You lie,” realises his persecutor during questioning, “because it’s easier!”
Of course! cries Stetko. It’s easier to lie, even to oneself, because that makes it easier to obey, and therefore more comfortable than thinking. Otherwise we might accidentally stumble upon the simple truth that ultimately we are transitory, forgettable, and worth only what those who remember us assign to our posterity.
Felix Culpa rarely shirks from hard questions. Their play last year The Designated Mourner by Wallace Shawn, was one of those rare, probing pieces that asked hard questions and occasionally offered an answer. The Monument I don’t know so well. I knew of it, that it had won the Governor General Trinket, but I’ve never read it, never seen a production. Based on that snippet of rehearsal, though, I would suggest this play will make a fabulous companion piece to the US elections, in which the questions asked by the play can actually be given context and answers in recent world events.
To what extent will people lie to themselves to avoid facing home truths? Ladies and gentlemen, I give you President-For-Real-This-Time George Walker Bush.
The Monument, a Felix Culpa-Rumble Theatre co-production at Performance Works as part of the See Seven Series, Nov 11-27, 604 257 0366