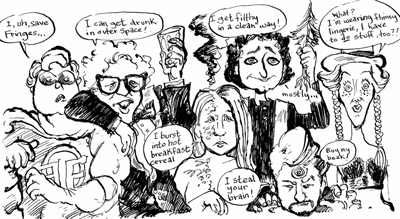 Another Fringe descends upon Granville Island like a swarm of candy-coloured bumblebees to sting you with laughter and tears and maybe make some honey. Having covered the last few Fringes, having been bribed to see so many past shows, I am now vaguely familiar with most everybody on the circuit, so here are several plays you must see. More on Only’s website, plus regularly downloaded reviews until I run ragged or some cast member from The Spice of Life succeeds in finally murdering me. Get yourself a Fringe guide from somewhere and go dance with the bees.

Cocktails With Lucky Eights
Lucky is one of the few British talk show hosts today who manages to make alcoholism look attractive even for exceptionally tall, unattractive people. His creator, Jason Bryden is possibly the funniest improv comic in Vancouver and the only man in history to make a genuinely entertaining commercial for KFC. Each night from Sept 10 at 6pm Lucky will interview one or more of the other acts from the Fringe, enabling you to have a lovely hour snorting beer through your nose and then be inspired to see other things. In a world of ‘”There Are No Dead Certs” this is a dead cert.

Lazy Susan
Theatre Under the Gun is the annual festival in which the best local small theatre companies scramble to devise a sketch in next-to-no-time using an assigned image, phrase and scrap of music/sound. It’s the theatrical equivalent of having to assemble IKEA furniture with a bomb strapped to your back, but often the results are spectacular. One of the best last year was from Theatre Melee, who have reworked theirs into this larger piece. For romantic necrophiliacs and Swedish fundamentalists everywhere.

Thomas Baxter’s Thought Control: Psychological Mysteries
I’m going out on a limb for this one. Or maybe I only… think… I am. This could be an astronomical dud bigger than our new tenth planet out past Pluto. It’s described as hilarious Thought Control, and that’s always good for a guffaw, but it could also be fascinating and unnerving. Or you could come out a chicken. I remember my mother went to see Ravine once, the famous mass-hypnotist entertainer, who commanded her to pull every beard she saw, uncontrollably. She got pissed and attacked Ravine instead and pulled every hair out his dumpling head. That was funny. Bald Ravine.

Others:
Cannibal! The Musical
Written by Trey Parker of South Park fame, but, oddly, not the same folks who just played it in the Victoria Fringe last week. Different cannibals.

Torched
Terri-Lyn (Hope Slide) Storey is one of the consistently best, most thoughtful performers on the Fringe circuit. Written by Kate Twa this show is a stew of sex and science and its press photo has Storey covered in oatmeal to simulate burns. That doesn’t feature in the show. Pity.