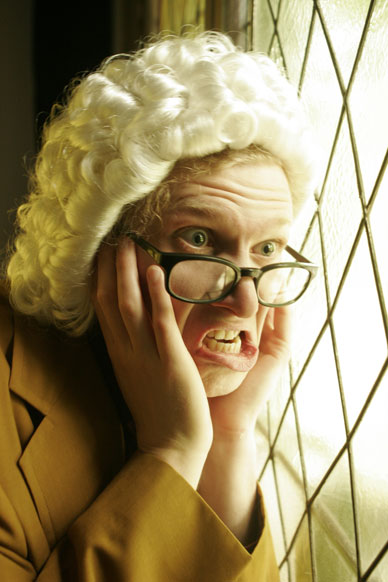 The 2007 Fringe Festival is over, and despite the controversies and burned bridges, it felt like a good one. Mistakes were made – which, in good faith, performers hope will be sorted for next year – and audiences seemed full and happy. I saw a fraction of my usual 50 or 60 shows, but just about everything I saw I liked or even loved, which is as good as any Fringe can get.

The Picks of the Fringe have been announced, so if you missed these shows, or even the whole damn Fringe, you can go a small way towards redeeming yourselves by catching them September 20-22 at the Waterfront Theatre, the Jericho Arts Centre and the Shadbolt Centre for the Arts. The picks are Uber Alice by Jonno Katz, Dishpig, So Kiss Me Already Herschel Gertz and Randy Rutherford’s Singing at the Edge of the World (so baby boomers can once again see the same thing he does every yearÂ­: shows for baby boomers to see once again).

Here, though, are some post-mortem reviews in the hopes that next year, if any of these performer return, maybe some recollection will stir in you of what they did this year and help you go see them.

Loungezilla
Filth at the highest level of lowliness. Fiely A. Matias, a scrawny little Chinese guy with a wee pot belly (don’t get upset Matias! I’m sure you have a raging penis hidden under that rose bush you wear strapped to your crotch that draws parades of men with scuffed knees to you) who, with musical accompaniment from his pianist, Scary Manilow, cavorts and frolics through a near perfect cabaret. The songs are fun, dirty, almost in tune, and short enough to survive Matias’ attention span.

Infested with fag hags and having an abiding love of crappy B movies, Loungezilla manages to be both slick and chancy because he can effortlessly incorporate his audience’s reactions. Folks are comfortable with Matias. Straight guys are happy to go on stage as recurring foils to his fantasies because he is such silly, unthreatening fun. Now, perhaps there is a risk of him being a “professional fag”, inviting us to laugh at him BECAUSE he’s such a queen, but he’s so professional and funny, I have a feeling this is really who he is. Another reviewer in town scolded him and told him to relax, that it was okay to be gay. I can see that point, but I have a feeling Fiely’s perfectly content with being homo.

If anything, the message I got from the show the night I went is that it’s okay to be straight. Straight dudes, all but carrying bowling balls and rolled up Playboy magazines tucked into their back pockets as affidavits of hetero-ness (actually, that sounds pretty gay, doesn’t it? I didn’t describe that very well) romped with Loungezilla and it was just like watching kids farting around playing and being goofy. For all it’s over the top gags about cocksucking and atomic penises, this show actually creates a sort of innocence. And I loved this one moment, peering back at the audience in 3D glasses provided for the final number, like that iconic 50s image of the crowd wearing red and green paper specs watching some radioactive iguana on the big screen. Except this 50s crowd was laughing watching a scrawny little half naked Chinese guy with a wee potbelly singing about his gigantic cock. Progress.

The Fugue Code
Music is math made tangible, arrangements of abstraction that fill the ears and can beguile the brain. Mathematicians and musicians have a lot in common: goatees and a lot of drugs. But also a love of games involving patterns, boiling down complicated ideas into expressions of elegance and devising secret codes that can destroy the world.

In the Fugue Code, four rather odd men – a musicologist, a composer, a singer and an organist – are thrown together to crack a code hidden inside the music of Johann Sebastian Bach, which threatens to unleash untold horror and destruction upon the world. I think.

Alex Eddington, creator and performer of Fugue, is obviously a frighteningly clever guy, and while he is not a trained actor, he has put a lot of thinking and ideas into this play. But what he is trying to do is write a 700-page conspiracy thriller, compress it down to an hour and perform all the roles single-handedly. He makes the mistake of assuming the audience understands what’s going on his head, where this play all make perfect because he has a masters in advanced music theory. The characters have the same creepy mannerisms, manic pacing, and breathless, all-knowing voice. They race about the stage, swapping lines of incredibly dense script with blurring speed. The audience has no access, then, to an obscure subject, and Eddington offers little help.

A few good jokes that crack through, mind, and the appearance of a JS Bach as a sort of demonic Arnold Schwarzenegger in a silver afro was hilarious, but overall, Fugue Code is an impenetrable wall of ideas.

On Second Thought
Performer Paul Hutcheson’s face is like a movie screen, on which his slightest gesture is twenty feet high and every special effect is on display. He tells of going from being a boy who knew he was different but afraid, and second guessing himself constantly, to being a man who has not only jumped out of an airplane and wrestled with a whirling lawnmower, but now spends his days concocting faux-shit to paint his legs for Fringe shows. Hutcheson is absolutely focused and engaging as a performer, exuberant and child-like in his glee at his own embarrassments. He’s so open and generous I wanted to run up on stage and hug him. Except, y’know, he’s got all that shit painted on him, and I was wearing my good linen trousers…

His stories about working with folks with learning difficulties drew a brief and uncertain hush from the crowd, until it was realised his amazingly accurate physical portrayals. In the hands of a lesser performer and human being riffing on retards could have been grotesque, but Hutchenson gave an affectionate tribute to the folks under his care. As he points out, if the so-called ‘mentally challenged’ were the majority, what a different and hug-filled world it would be. Except, of course, you know, there’s that thing about the shit getting on my pants.