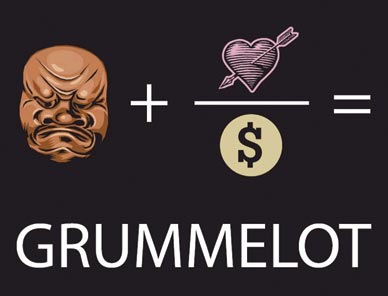 Commedia dell’arte is a very traditional form of Italian theatre dating from the 15th century, but which spread throughout Europe. Employing masks, mime, outrageous clown characters and simple, archetypal storylines, little troupes of players used to wander from town to town entertaining locals in dirt streets or nearby fields.

Stories from the Attic put on a reverent, old style commedia show, but being so true to a six hundred year old form renders it a museum piece. Their cardinal sin is to revere the irreverent. In their day, commedia troupes were just milking pennies out of locals for jokes about farting. The bare bones plots would be hung with the latest local events and scandals, making them relevant to the viewer. As with Shakespeare’s work, which took a great deal from commedia, a play can employ traditional techniques but must speak to its own time to have meaning. The Simpsons is basically commedia dell’arte, using cartoons rather than masks, stock characters and situations to poke fun at the current world.

Also, while the Simpsons have a whole cartoon world to play with, their stage is a small television screen, so the small gestures become just as important if not more than the huge. Less is more is the clown maxim. Ancient commedia used huge, rigourously styled physicality because they were playing to large crowds. Attic are in the tiny, intimate Beaumont, and might have scaled down and intensified their performances to make comedy rather than present history.


The Great Orbax Sideshow
Freaks are great. Once you’ve made the decision, wholeheartedly, to cover your body in lizard-themed tattoos, implant horns in your head and split your tongue in half, it’s really, really hard to go back to mainstream society. And the mainstream is now more fucking weird (maybe) than ever, which makes freaks the only normal people out there. Granted, folks have been saying their times are the most interesting for 5000 years. (“Pharaoh! Some Jewish guy is splitting the ocean in half and going walkabout with all our slaves. Meanwhile, it’s raining frogs.” “Man,” says Pharaoh, “That is so fucking weird! Get my frog umbrella, I wanna pop out and see this!”)

The Great Orbax Show have been crisscrossing Canada sticking things up their noses and inflicting pain on themselves, probably mostly for college kids for whom a man who can swallow a condom and inflate it out his nose is the closest to mysticism they’ve ever seen. I’m not saying I could anything of what these guys do. I don’t even have a Hello Kitty tattoo. But having seen some freak shows I was expecting something more visceral. Also, way too much talk. The opening act of reading some Vancouver crazy’s END OF THE WORLD tract, found taped to a lamp post, for ten minutes and commenting on its spelling airs is something I can do myself, cheers. Granted, it is a little more interesting being read by a lizard.

Maybe Orbax scaled down what he usually does because he thinks he’s in a respectable venue, or that Fringe audiences have weaker stomachs than students, or fire regulations demand he doesn’t set his head on fire. But when I see freaks I at least expect them not to rely on volunteers from the audience being the butt of their jokes to get a reaction. That said, the split tongue thing is pretty damn cool. Maybe I should that instead of Hello Kitty.


The Aleatory Project
A mysterious emergency outside leaves a man and a woman stuck together in a hotel room, getting to know one another and test each other’s destiny. Flipping coins, overturning random cards from a deck and the midway point of an hour on a digital clock will determine the paths their lives will take. Each card is a new direction or rule guiding their fates, but do we really have a choice in our lives, or is everything predetermined? After half an hour they swap roles, the passive aggressive professor and the curious prostitute he has arbitrarily picked up to spend the evening chatting with, becoming each other in a new sex and with a slightly different viewpoint.

Supposedly, by its very structure, every show is different. I can only take them on their word, although they do offer a chance at the end to win a free ticket to see the show again as proof. Frankly, I don’t believe it. Declaring the rules as he goes along, the professor always has complete control of the game. The only possibility to see the rules in action is when somebody picks, say, a ten again. But when it happens, the players suddenly ignore the rules and continue following a scripted plot. But what makes it so unbelievable as improv drama is the stiff, actorly acting – the obvious repeating of rehearsed lines in controlled voices. You can fake spontaneity but you can’t spontaneously deliberate. Perhaps each card is a chance module of a fixed action; pick an ace we do this scene, pick a four we do that. And maybe the process of working all these modules seamlessly together while continuing to tell a story with a very obvious beginning, middle and unbelievably coincidental, contrived end, creates an appearance of stagnant plodding. But what’s the point?