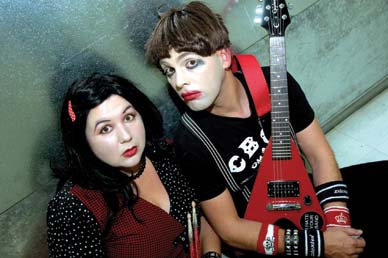 Die Roten Punkte
LIVE, direct from Berlin via a bunch of places, comes the greatest punk band in the world — Die Roten Punkte! Ja! But of course, ah so. Zhey are zuper!

Brother and sister Otto and Astrid are in a band, hammering out punk songs on child-sized instruments, rocking Vancouver, and knocking over everything on stage including each other. Die Roten Punkte is a brilliant clown show of infantile incest and lipstick smeared pouts, but I don’t have many notes on the show because I stupidly sat in the front row and when I tried to scribble stuff down they busted me. Fortunately Astrid misread my scrawls and thought I thought she’s hot (so I might have a chance there if I can pry her away from her leering, angry, hateful, desperate, sexually frustrated and confused, deluded, regressed, ugly brother who is not so cool as me. Nein.).

Taboos are so clichÃ© now, but Die Roten Punkte manages beautifully to make the audience squirm with fresh revulsion. The plot is nothing more than a chance to play a bunch of songs, and the characters are simple and huge, which lets Astrid and Otto go anywhere they please in their delightfully inbred sickness. This is a short review, not just because I haven’t any notes to work from, but because there is only so much a theatre critic can say except the show is terrific and already a crowd favourite at the Fringe. It seems they have a cult following, who probably travel the world following Die Roten Punkte, lavishly devoting themselves to the pasty faced pair while secretly scheming ways to distract Otto and get into Astrid’s frazzled tights.


Get Off the Cross, Mary
Bruth (not ‘Bruce’, anybody named Bruce could be called Bruce. Bruth is unique!) the flamboyantly arrogant former Hollywood superstar, and the most famous puppet ever to look like a giant turd with Elton John’s glasses for eyebrows, is shooting for a comeback. The only subjects big enough to warrant such a major filmic event are Jesus Christ and herself. So, the slaphappy bitch decides to do her biopic as Jesus. Gathering together friends from a burned out past and some sexuality-flexible puppeteers willing to stick their arms up her ass, Bruth sets out, on a budget of cheesestrings and second hand sequins, to make a picture bigger than Mel Gibson’s Passion. Well, bigger than the film, anyway – maybe not Mel’s passion for booze and Jew baiting.

There are a lot of clever ideas here, for a production that one of the performers told me was created in and hurry and on the hoof. (Or the woof. Or the weal and weft. No? Textile humour gets no play anymore?) The metaphysical and satirical joke of white slave “handlers” catering to “black” puppet bosses’s crazy whims while still being the ones manipulating their masters manages to hold throughout. Weirdly, it’s the gayness of the thing that gets in the way. There’s lots of stretching of punchlines and overuse of gags (along with the occasionally absolutely brilliant ones) but shows that feel simply using the word ‘gay’ makes them funny… Saying “queers can be funny” is like saying “Hollywood has some funny people living there.” Gay being funny is better than funny being gay, I think.

More time and Get Off the Cross, Mary will sing. Right now it’s lip-syncing.


Not Even an Ostrich
Claire, a promising former student, moves in with Professor Phil, a poetic, middle aged academic wreck, who secretly has only a few months to live. The power relation of randy teacher and hot student shifts inevitably at the words “Oh, professor!” but there is not a single clichÃ© in sight during this show. Acting wise, the show is pitch perfect. Drew Taylor as Phil, the philosopher in shorts trying to seduce his boarder, isn’t so much world weary as weary of himself. Urszula Petrykowska can be bubbly and enchanting and moody; selfish and thoughtful all at once. The coolest thing about Ostrich is the way the environmentalism angle, which at first I took as a token cause for the professor to espouse, as a metaphor for the cancer eating him up, is effortlessly turned it into a comment on the care fatigue people everywhere ‘suffer’ regarding the issue. The problems of the world today seem so huge, insurmountable, and somebody else’s fault, we feel unable to energise ourselves to make the changes needed in our lives in order for life to continue.

A very professional, tight, utterly human and subtly pointed production. And the poetry is actually good! I was thinking the Firehall Theatre was a venue just too far off the Fringe track for me to trek out there, but this show convinced me to spend more time seeing what’s on there.


Miss April’s Day School for Burgeoning Strippers
Miss April takes you by the hand (and only the hand please, gentleman) and leads you on a tour of the life of a journeywoman peeler. Obsessed with television soap operas and dreaming of going to soap opera school herself, young June turns to the Heartbreaker Strip Joint for easy tuition money and becomes April, the favourite pole jockey and lap-warmer of men named Steve holding wads of folded fivers in their greasy wallets.

Let’s put aside the ethical and moral issues of stripping and dancing for money. The power relationships, the subjugation of women, the manipulation of weak and lonely men. In purely theatrical terms, it would be nice to see why, exactly, April is drawn to the adult entertainment industry, how she can survive as meat for hungry eyes. The need to pay bills and finance hopeful dreams isn’t enough. There is something in her letting her do this degrading work, but she and we never really see it. This is a ‘slice of life’ autobiographical piece from June Morrow, creator, performer and former dancer in bars around Ontario. She doesn’t need to justify her life, or apologise for it. Fuck that. But if it’s to be theatre it seems to me this should be focused on as the fascinating core of Miss April.

On a purely technical note, there are some good jokes, and Morrow has comedic timing. She can obviously sing, but a musical demands you can really SING. Her preferred range is in the middle, but she appears more accomplished in the highs and lows, and more power and confidence is needed. Morrow strangely doesn’t seem comfortable in her own skin, and no amount of stripping will cover that up.