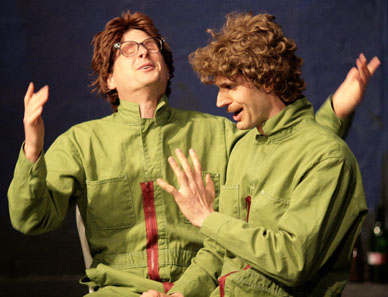 Tale of a T-Shirt – Fixt Point Theater
“Make me something with two seams, four holes and two sides. Go to the place where people work the hardest for the least.” Something else, something else, point it… It was a lot of stuff to remember, and it was delivered by a sock puppet. Charged by her fiancÃ© to unravel his riddle before he will consent to marry her, a young girl – the town fool – must travel to India, China, and back to the US following the life of a simple T-shirt from a puff of cotton to a cheap scrap of clothing ending up in a discount shop. Along the way, the backbreaking labour of Third World labourers – the sweat and blood we fail to see on the bleached and dyed fabric – leaves its mark on our heroine.

Fixt Point Theatre – three remarkably focused clowns – present a rather looser show that tries get its audience to imagine, for at least an hour, how the world might be better if we paid more attention to where the things we blithely consume really come from.

The performers, Amber-Kelly MacKereth, Sophia Laggner and Lisa Marie Dilberto, are wonderful clowns making a sweet show on a budget of around nine dollars. The show itself is so rambling and unkempt that it’s actually a little hard to follow, which is weird because usually I don’t care where a clown show goes. The fun is in the going. Tale, however, is a show of conscience, with an important and immediate political message that is both rammed home and left to wander at loose ends. That’s not to say it’s slack – these are folks trained by Phillipe Gaulier after all, who’s all about working and reworking. It’s Just an awful lot of fabric to work with to make something as necessarily tidy as a Fringe show on the cheap. However, it is funny, with stacks of heaps of sincerity and heart. Plus, the three performers have something big to say, which is nice to see in a Fringe.


The Cody Rivers Show: Flammable People
If the Pajama Men are intense, the Cody Rivers boys are energetic. Dressed in matching green boiler suits with stylish suede crotch zippers, they whirl and whiz and chop with such precision that if you threw a carrot at them, it would be julienned. With relentless word-choreography and Gene Simmons hair, they fling themselves about the stage, melding into each other, splitting apart like amoebas in a poetry dish full of coffee, yammering streams of high octane gibberish until I felt exhausted on their behalf. The machine gun delivery means I didn’t understand much of what they were saying, which they anticipate and alleviate somewhat by ensuring clear punchlines bracket the expulsion of air from their lungs. Actually, I’m not sure they actually breathe. They might take in oxygen through their eyelids like lizards. It’s the only way to explain how they can go on for so long. Oh sure, they might just be masters of some obscure Swami mouth-breathing technique that allows them inhale air while drinking a glass of water, but I think it’s just as likely they are giant lizards in green plumber outfits. Queen Elizabeth II is frequently seen wearing her boiler suit, and she’s well known to actually be a lizard from outer space.

Mike Mathieu and Andrew Connor could be funny eating jam, but virtuosos displays of energy are not enough. While it does dazzle an audience, they are at their most hilarious when they slow down enough for us to see and hear them as more than a whine and a blur. Their kinetic dancing actually slows them down and lets us appreciate more what they are actually saying rather than simply being impressed with how fast they are saying it. They are super-powered action heroes of comedy, but I wish they had slowed down just a bit for my poor mortal brain to appreciate better their daring do.


Jem Rolls Up – Big Word Performance Poetry
Having recently returned from living in India for six months (apparently preparing for his future career as a spokes-model for a shampoo company with luscious, flyaway blond hair) Jem fills yet another Fringe hour with relentless, booming, hilarious and often deeply insightful observations.

Rolls’ style has changed over the five years I’ve been seeing his shows. The structure of his poems and presentation is much looser, less technical. Occasionally the polish gets a bit thick as the variations on delivery he used to employ make way for what has proven to work time and again. The up side is the more general looseness that he now employs. Don’t get me wrong, see Jem Rolls and you are in for a barrage of Scots-Cockneyisms, bellowing with arms churning like a windmill and Vulcanised facial expressions stretching like saltwater taffy. But where Rolls has previously just bitched about stuff, there is now a definite and coherent philosophy being expounded. I’m not sure what exactly it is, I have too much fun watching him flap and boom to pay TOO much attention to what he’s saying, but where once there was an energetic beat poet/stand-up comic, there is now a world-weary prophet, standing on a plastic milk crate on a mountain somewhere, spouting universal messages to the trees.

The point is: If you’ve seen Jem Rolls and like his stuff, then he’s back in town and you should go see him. If you haven’t seen him before, you should see him anyway, and wonder what he looked like before he discovered conditioner. Either way, decide for yourself if this veteran Fringer isn’t halfway to becoming something bigger than what he is now: A true poet. (Hah! I can’t wait to see what he says about that at the Fringe bar.)