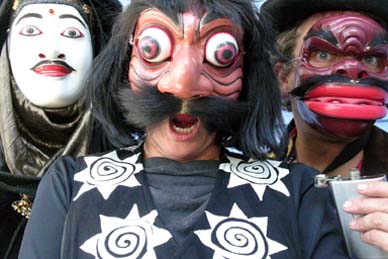 Bye Bye Bombay – Cara Yeats
A billion Indians escape the squalor by watching three-hour epics of froth and frenetic colour pouring seemingly daily out of Mumbai (nÃ©e Bombay). Young, self-absorbed Gori flees the repression of not having a cool enough life in Vancouver to the vast, vertical spectrum that is modern India, where fairy tale luxury sits kitty-corner to dazzling poverty. And now: DANCING! Hi ya! Karate chop! Aliens? Time to SING!

Hand held puppets, film, music and adorable, scrawled cartoons on a slide projector accessorise the day-glo sari of a show wrapped around Cara Yeates’ actual adventures in India earlier this year. Yeates, whose sweet little tale of planting trees, Knee Deep in Muck, was a wee gem, has decided to go for the whole tiara. While it is impossible to convey the sheer immensity of India, Cara smartly presents a slim slice using puppets, dance and a film/slides media accompaniment. Yeates’ physicality continually improves, assisted no doubt by her director for this show, Jonno Katz (no slouch himself). Her gift for simply yet sharply defined characters gets stronger every year.

With bouncy athleticism, she flits about the bare stage of Playwright Theatre Centre, invoking India not so much with the computer-projected parade of images taken there (which give a sense of the place but, understandably, no more) as by recreating a handful of the people she met there, each probably an amalgamation of several individuals.

The next step of evolution will be to move beyond story telling with films on the side. Yeates is so charming she can own any room she walks into, so it will be amazing when she feels ready to take her audiences into deeper places. Another kick-ass show. But now we must SING! DANCE! FIGHT! MAKE ROMANCE!


Versus vs. Versus – The Pajama Men
Barefoot and flannel-fluffy, but make no mistake, these men are dangerous. Recently, the Pajama Men performed in a theatre before 80 eighty-year-old women, all of them millionaires. After the show the audience fell into a riot over who would take them home and make them hot chocolate. Pearl necklaces and false teeth clashed while the boys slipped out the back and escaped in their Pajama Mobile, a large pillow with wheels. Whatever you do, don’t take your grandma to this show. She’ll get that look in her eye and then she’ll be on stage trying to wrestle homemade socks on their filthy feet.

Versus vs. Versus is actually a new show, not a rehash, although several popular characters return and several new ones are variations of previous. As with all new material, some of it doesn’t work quite as well except as links and springboards. Marc Chavez and Shenoah Allen, however, never fail to make me cry – usually through laughing, but again, I mention those filthy, stinky feet. While there is controversy surrounding their show as being part of the Encore series, I cannot bear the idea people might miss them because of it. So, Dear Adoring Readership, I charge you with this: If you decide to Catch Versus vs. Versus (and you should) then you must counter the bad ju-ju and voodoo and karma and mojo and whooshy-whooshy-ping by seeing TWO non-Encore shows. You should anyway.


Apa Kabar! – Theatre Bagger
The world is a mad place. I read that somewhere once, and sometimes the only release is to simply let yourself be mad. Once a year in Indonesia, folks apparently give themselves over to the craziness with clown and mask shows, and general ridiculous mayhem in huge public performances.

Mask work is hard stuff to do, and finding decent masks harder. Thomas Jones has somehow got his hands on 50 of the most incredible, beautiful masks I’ve ever seen. Some of them must use glass for the eyes, giving them such a clarity, luminescence and life of their own that I was half convinced they were actually on springs and capable of moving. Of course, that is actually the knack of the experienced mask performer, and TobyBerner, Sarah May Redmond, Tallulah Winkelmann and Tom Jones are all brilliant, creating massive, intensely human characters while they cavort on the stage doing, well, very little at all, really. Although we all wear masks shielding our inner selves from the world, actually wearing a mask frees the body to communicate all sorts of stuff because our eyes no longer focus on the human face we think we know.

Once upon a time there was a perfect face, with even features laid out with mathematical precision. The next face, which could not hope to be perfect, was ever so slightly askew. The third face thought, ‘What’s the point? I might as well relax and have some fun!’ and went nuts. Eyes bulging in opposite directions, nose like a turnip, eyebrows like a badgers and a mouth like a crazy, laughing fish. Every human face is a caricature of every other human face, and the most human are those veering most wildly from the notion of ‘perfection’. Apa Kabar is the truly beautiful people laughing at those of us cursed with non-pumpkin-shaped noses, inviting us to relax and wallow in madness.