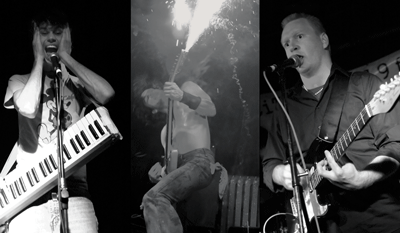 Man what a disappointing week last week was. First some boring band won Shindig, and then Nicole won America’s Next Top Model. The boring white chick beat the equally boring black girls. But at least they were black. That’s essentially how Shindig finished up. It couldn’t have come more boring and straight forward than Romance. But if either of the other finalists had finished first, we’d be slightly appeased, but still complain about how this year’s Shindig was a big waste of time. Getting drunk on Tuesdays is fun, but the tournament needs to seriously re-evaluate what it’s striving towards. If it doesn’t, it will no longer attract interesting acts (it hardly does already) and will basically become a farm system for Virgin Wednesdays at The Buffalo Club.

This year there were so few applicants to the tournament that the organizers had to invite established local bands (who already had records released, and had said records reviewed on Pitchfork) to play. There’s no way this is due to a lack of new bands forming. It’s due to the well-deserved notion that if a band is trying something remotely unique, Shindig is a waste of their time. Originality was at an all time low, but at least Hot Loins, The Weather (both of which have Only contributors, so don’t try to call us on bullshit), Fun 100, and even Go Ghetto Tiger were sort of trying to stray from the shitty path of mediocrity that Shindig seems to favor.

Last year is a better example of unrewarded originality. Although there’s no reason to plug Dandi Wind ever again, she is the best example of why Shindig has been such a letdown, and at the same time why it is still worthwhile. Having hardly played a gig before last year’s tournament, Dandi packed the Railway for all three of her performances, and immediately spawned a buzz that made everyone pay attention. Yeah, she’s completely full of herself, but no one had heard of her before Shindig, and about three months after losing Shindig, she appeared on the covers of Discorder and The Nerve simultaneously. She lost to Vancougar, and honestly, what the fuck happened to them?

The tournament organizers need to re-evaluate how Shindig is appealing to bands, and how those bands are being judged. Instead of inviting pre-established acts to play, actively seek out experimental and less straightforward bands no one has ever heard of. We know for a fact that at least two of the organizers go to about twenty local shows a week. They know the new bands. Get them to play. If they’re not into it at first, stress how rad the first prize is. Any young band – no matter how too-cool – would love to score that recording time. For the judging process, there should be fewer judges, they should have diverse musical tastes, and they should have to come to a unanimous decision.

On the Only Shindig watch team, all three members had to agree on the same band for us to crown them that week’s winner. If one member disagreed, we would sit down and try to convince each other until we got too drunk and gave up. If there were only three or four judges on the actual panel, none of the judges could get drunk in the back and phone in their results, no judge could ever get away with playing favorites, and more thought might be put into a final decision. Shindig is a very important event for the local music scene. Next year, it would be nice if we felt like it actually mattered.