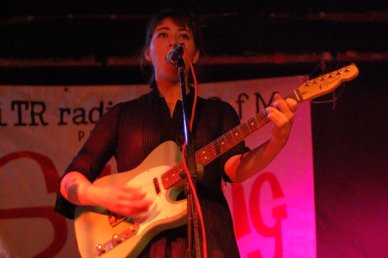 Two years ago, we were fed up with Shindig. We wrote this long thing complaining about how the whole competition was worthless, how it always rewarded mediocrity and how it was on the cusp of flailing aimlessly into irrelevance. Many disagreed, and we lost a lot of friends because of it. In no way are we anxious to repeat that experience, so this year’s look back at Shindig will be far less scathing. Not because we’ve suddenly grown a heart or value our friendships any more than we did back then, but because, really, Shindig ’07 was pretty sweet. Many of the best new bands in the city entered, we almost always begrudgingly agreed with the judges and the three bands in the finals were rad.

Here, in no particular order, are our favourite quotes from Shindig Watch ’07.

Barry: Why did the chicken cross the road? Ben Lai’s Penis!
David: This is really tough, but I’m gonna have to go with bachelorette number one, and I choose the Tahitian holiday package with the his and her jet-skis. Fanshaw, call me! 778-869-7641.
Brynna: You should check out this next song on our MySpace at myspace.com/retrofireband. It’s called “An Illusion”.
Chuck: Do I have to be the one to say the Blues Hammer thing?
Chloe: I can leave now, I saw Petroleum By-Products.

While Petroleum By-Products were obviously the Only faves, we’re not as choked as you might imagine about Fanshaw stealing the win. Some of us have not-so-secret crushes on the lead singer, and if you use the past years’ Shindig winners as a barometer, they were pretty much a shoe-in. Rather than rag on them like we might have done two years ago, we decided to keep things civil and graciously congratulate them on the win. So, as a token of our adulation, here is a quick email interview we threw together with Liv, the lead singer.

ONLY: At what point did you know you were going to win Shindig?

LIV: Once the Public or the Press broke up… Although, I actually didn’t know I won when I did. Too many celebratory beers left me thinking I had come in second, until Luke Meat was like, “look at your trophy dummy.”

ONLY: Did you have anything to do with The Public or the Press breaking up?

LIV: Yah I called Ben Lai and pretended I was their guitar player and said I was leaving the band. He didn’t know it was me because I used a vocoder.

ONLY: Notes are provided for every performance. Any favourite comments to share?

LIV: Someone said I sounded like a cross between Bjork and Joan Baez (?

). Actually the best was “Now that I know there are two songs left I can write bigger.”

ONLY: It costs $7 to get into Shindig but bands don’t get paid a dime. What up with that?

LIV: I’m assuming CiTR does this as a fundraiser. They need the money, believe me… support campus and community radio!

ONLY: In the past five or six years the Shindig winners (Vancougar, Romance, The Front, etc.) haven’t really gone on to do anything, sparking some to say there is a “Shindig curse”. Are you worried about that?

LIV: No, for two reasons: 1. We actually lost the first round and 2. Last years winners Victoria, Victoria! are going to be in a movie with Michelle Pfeiffer.

LIV: When is his clothing line coming out???

LIV: Yes, that’s why he only played the first show. Eric Axen from a band called Hermetic played bass.

ONLY: What’s next for Fanshaw?

LIV: We already recorded half a record in July. I expect it to be done spring-ish. I need to write more songs though…