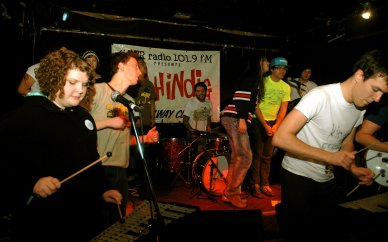 Only Jokes for Beer: One.

Brynna: I hate nerds but I hate sucking more, so…
Barry: Why did the chicken cross the road? Ben Lai’s Penis!
Chuck: Well, time for a piss and a toke.

Next Week: The SSRIs, The Petroleum By-Products, Fanshaw

Only’s CiTR Shindig Watch team is Brynna Childs, Barry Higginson, Chuck Ansbacher. We’re at the Railway every Tuesday to overrule the verdict and out-judge the judges.

*We really love Fanshaw so much. Honestly, we do. But we love Greenbelt just a teeny bit more. But we were pretty sure that Greenbelt were going to win last night, and we were so sick of agreeing with the judges every week that we decided to put our vote in for Fanshaw, just to be a bit different. It backfired.