Shindig Watch: Round Two, Week One 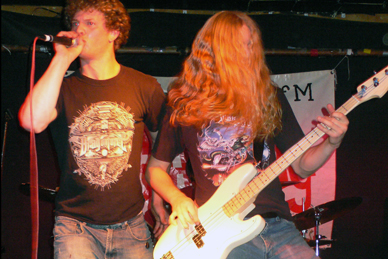 Only Jokes for Beer: One (welcome back Barry).

Brynna: You should check out this next song on our MySpace at myspace.com/retrofireband. It’s called “An Illusion”.
Barry: Is that freedom rock, man? Well turn it up, man!
Chuck: I don’t really like singers as drummers, and I don’t like it when kids younger than me can grow beards bigger than me… But I do like Zack Effron!

Only’s CiTR Shindig Watch team is Brynna Childs, Barry Higginson, Chuck Ansbacher. We’re at the Railway every Tuesday to overrule the verdict and out-judge the judges.