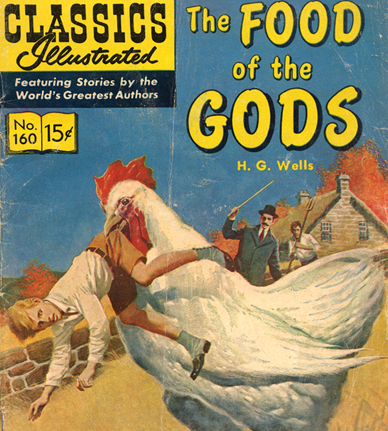 Dr. Mary Schweitzer of North Carolina State University has found protein cells, still spongy and red, in the thigh bone of a once pregnant female Tyrannosaurus rex from 68 million years ago. Apparently, based on initial investigations, the cells don’t resemble lizard so much as chicken, ending age-old speculation in the scientific community. Yes, Virginia, dinosaurs did taste like chicken. Yes, Colonel, you could fry them, but you’d need a lot of flour. The media are now stoking the question of whether mad scientists, should they manage the unlikely feat of extracting viable DNA from fossils, might create actual Jurassic Parks full of Fun Houses stocked with velociraptors and mobile rollercoasters running down the backs of brachiosaurs.

Probably not, but if you want thrilling scenarios, other scientists elsewhere have nailed down the gene which determines the huge variance in dogs. Dogs have the widest range of scale for any mammal, from the tiniest Chihuahuas to Irish wolfhounds and Great Danes, a size differentiation of around 1-100. Head of Comparative Genetics at the National Human Genome Research Institute in Maryland, Dr. Elaine Ostrander, examined DNA samples from both small and big Portuguese Water Dogs, and discovered what she calls a “master regulator” gene. Ostrander and Dr. Nathan Sutter at the National Institutes of Health took samples from dozens of different breeds at pedigree dog shows, and narrowed it down to a reproducable gene that encodes Insulin-like Growth Factor 1 (IGP1). Imagine manufacturing IGP1 and giving it to a chicken. A ten-pound roaster could be inflated to a 1000lb monster, standing 10 feet high, daring you to prefer white or dark meat. An ostrich, normally nine feet tall and around 300lbs… Settle down, Colonel. Don’t run away, Virginia. The new T. rexs would probably poke each other’s eyes out first. Just don’t wear your quinoa-coloured beret the day you visit the zoo.