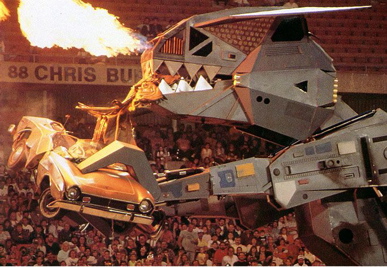 What if you were lost in the Gobi desert, with nothing but a stretch of road, a pig’s cheek, a langoustine (or maybe a few tiger prawns) some garlic and cream, and an Audi A6? How would you survive, especially if you had a medical condition which required you to eat only high-class Michellin star-quality meals?

In this short film produced by the Observer/Guardian newspaper in Britain, science correspondent Alok Jha squirms as award-winning chef Anthony Flinn fixes a posh meal using a car engine as a kitchen. The film is a blatant advertisement for Audi, and never mind cooking on a grease monkey’s playground, there is something… sinister about encouraging the notion of eating out of what you pollute with.

Having said that, it’s still fun to watch. I don’t own a car. I don’t even own a bike. I have a unicycle with a flat tire. I figure if I leave it in the sun long enough, this summer I could scramble an egg on the seat and spin some taffy through the wheel. Eggs a la Taffy, the meal de la choix pour les Welsh clowns. Mmwoah-POP!