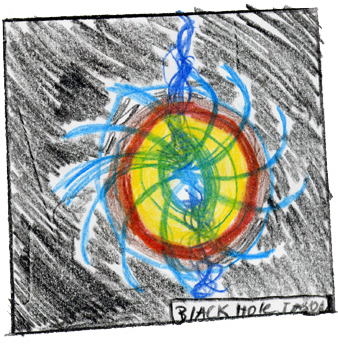 In The Name Of Sexy Annihilation

“It is important for the human race to spread out into space for the survival of the species. Life on Earth is at the ever-increasing risk of being wiped out by a disaster, such as sudden global warming, nuclear war, a genetically engineered virus or other dangers we have not yet thought of.”

“Also, paraplegics should get free passes to flesh houses and massage parlours. And rodeos. If you strap me onto a horse and give me a robot arm, or a Spiderman-style web-spinning device, I could rope me a steer.”

The above statement was made to me at a Dr. Who convention in my head, in which Dr. Hawking, dressed as a Dalek, and myself, dressed as a Borg in lingerie (“You will be sensually assimilated! Resistance to scented-oil full-body Shiatsu is futile!”) were chatting. The statement above the statement above, however, I read on the Lifeboat Foundation’s site, lifeboat.org, a non-profit society boasting Nobel winners and Mensa singletons as members, which believes humanity is at risk of extinction due to any number of causes, such as meteors, machines taking over the world in a Skynet scenario of “technological singularity”, and events in the lives of celebrity cultural figures such as Britney and Anna Nicole coming to have more importance than, say, breathing.

The latest cataclysm du jour for Lifeboat is the Large Hadron Collider particle accelerator that came fully online this month in Switzerland and France. Hadron is a 27km long facility sending beams of energy and supersubatomic items smashing into each other with as much power as two 400 tonne trains roaring into each other at 120mph. Now, this may not sound like much to you, but trust us scientists, it’s a lot. A LOT. It is, in fact, sufficient to bash out exotic and predicted-but-never-before-seen beasties like bosons, psi-mesons and Kate’s good sense with men on Lost (When, oh when, will she finally notice Hurley?). The 1000+ scientists entrenched at LHC hope to understand why there is more matter than antimatter in the universe. They also expect to create artificial black holes on the side, possibly at a rate of one per second. This has the folks at Lifeboat terrified.

Black holes are daubs of collapsed space at which the forces of gravity are so extreme even light cannot escape. Matter and energy are sucked into these monsters, and either crushed to nothingness or carried in theoretical ‘wormholes’ to distance corners of the universe. Physicists contemplating String Theory, otherwise known as ‘’M’ or Unification Theory, are excited because they’re rather desperate these days. String Theory, the idea that the universe is composed of tiny, vibrating strings of interlaced energy weaving together an infinite number of multiverses, has seen criticism lately because it sounds so silly. However, if these extra dimensions, suspected of being folded up inside each other on an incredibly minuscule scale, were pumped with so much energy they experienced pockets of gravitational collapse, or black holes, it would bring renewed credence to the field and billions in additional funding.

Instant annihilation, however, is sexy. People won’t stop driving cars but they will protest exploring the origins of life, because you can’t fetishise Global Warming the way you can Death On Tuesday, and taking apocalypse out of the hands of God and putting it into those of scientists (as opposed to Global Warming, which is putting it in the hands of everybody with an air conditioner) is wrong. You can’t even get a good video game out of it.

Mind you, as Stephen Hawking puts it,

“I would not mind the world being destroyed if I could be on a spaceship having Carmen Elektra polishing my hubcaps with canola oil. I just hope it happens soon. I’m not getting any younger. Akk! Ex-ter-mi-nate! Ex-ter-mi-nate!”