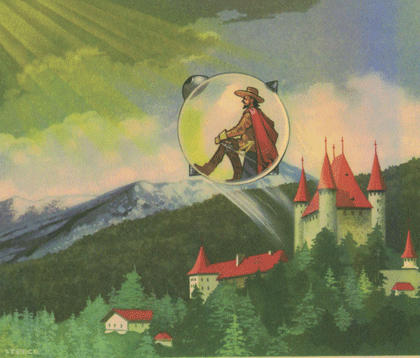 Better than the view from your penthouse

Canada is entering the space race! Soon rich, tubby tourists (whom Only hereby dubs “Cashmorenauts” or maybe “Wantnauts”) will be able to experience weightlessness and views of the world better than from their penthouse condominiums. Hooray for science-in-the-service-of-fleeting-entertainment!
PlanetSpace, an American/Canadian firm, plans to send the first private citizens into suborbit as early as 2009. Three hundred acres of land, about a third the size of Stanley Park, has been set aside on the fringes of Cape Breton Island for a spaceport. From this site, spacecraft will be launched that are reusable and ethyl alcohol-fuelled, based on Hitler’s famously efficient V2 rocket.

Four thousand new jobs will be created, employing former lobster fishermen, coal miners, and fiddle players to build, launch, and fly the rocketships by remote control. After all, it’s not like this is rocket science or anything. Mission Control can be operated out of any standard laptop computer at one of the back tables of the Red Shoe Pub in Mabou. The ride will cost $250,000-a-head, plus an optional $30 for a traditional meal of fish cakes and beans, and a pint of Glenville whiskey after a graceful re-entry and full stop outside the Red Shoe. There might be another five-dollar cover if a band is playing that night.

The eight-seat passenger capsule, designed to glide at hyperspeeds of Mach 22, is called the Silver Dart, both in honour of the 1909 prototype created by Alexander Graham Bell, and in realistic recognition that if the villagers happen to drain the fuel tanks on any given Friday they can be topped up with the local moonshine, known as “silver.” The tanks, not the villagers.
Participants get two weeks training (“You go up, you come down. Any questions? Tomorrow through to next week: What to do if you just keep going up, or: How to play Parchesi until your air runs out”) to learn what NASA wastes years drilling into its astronauts.

The $200M venture projects generating $400M per year for the local economy. I’m not sure how. With launches every two weeks, regardless of weather and technical problems (a round trip lasting 15 minutes, including four-and-a-half minutes of complete weightlessness) it would take a decade to make 500 million dollars. Presumably the rest will come from selling on-flight snack tubes of clam chowder and souvenirs like the Box ‘o’ Space or bottles of Ernie’s Wicked C2H5OH in peach, blueberry, and crab flavours.

Hopefully Ernie’s Wicked C2H5OH will be a diet drink, because according to a US Center for Disease Control and Prevention 2002 census, the average American male and female weighs 191 and 164.3 lbs, respectively. With take-off creating 4.5 g’s of pressure on our male Wantnauts, it will be like having a 859.5 lbs person sitting on their chest. Basic training must include “How to Breath and Keep your Obese Heart Pumping Beneath Six Refridgerators.”
(Obviously I have misrepresented the nature of g force for the sake of a cheap gag. You try making centrifugal capillary compression funny.)

Initially I was also concerned about the environmental impact of burning tens of tonnes of ethyl alcohol per flight. Granted it’s cleaner than oil, but combustion still releases CO2, as does its fermentation. Not to mention the fertiliser and farm machinery usage needed to grow corn, the traditional crop used. However, if switchgrass or hemp is used, the greenhouse gases released are not much more than what those same crops will absorb in growing.

As this farmland can’t be used to grow food or even trees to absorb carbon dioxide, or provide cheap housing, or wilderness for vanishing wildlife, I can think of only one reason PlanetSpace should go ahead: When the world’s biggest consumers return to Earth, maybe they’ll come back with a better perception of its tininess and fragility.