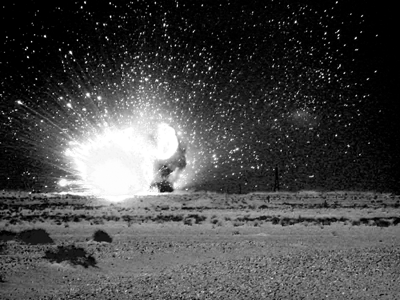 Nobody expects a piglet

The other day, while walking along shady Bute Street carrying a couple bags of groceries, there suddenly came a god-almighty-huge explosion a few yards above me. Out of the corner of my eye I saw a cloud of greasy black smoke, and something large and coal black dropped past my head and landed in some bushes.

Customers at the Bread Garden cafÃ©/bar/not-bakery across the street spat out their muffins and afternoon martinis to scream better. Traffic on Robson Street froze. From a retirement complex with its very own built-in miniature police station spilled a seemingly endless stream of cops with guns half drawn. People everywhere shrieked and immediately advanced in gleeful terror. I looked down into the bushes. A smouldering crow lay there dead, its neck burst open. It had somehow chewed into an electric power line and suffered a massive jolt of self-inflicted lightening. I told my theory to the cop next to me.

â€œThat would make sense,â€ he nodded almost disappointedly. â€œWe just lost all power in our buildingâ€¦â€

I turned to the excited mob and in my too-loud voice announced, â€œMove along folks, nothing to see here. Just an exploding crowâ€¦â€
Well, you should have seen their darling faces drop.

When even birds are contributing to the Atmosphere of Fear (or, â€œAtmosfearâ€), then the Terrorists have truly won. Is it any wonder airports are now refusing passengers to carry bottled water, shampoo, books, and suspiciously jiggly, gushy babies onto planes? Anything could be a weapon. In the spirit of all those CNN and Fox Network special reports endeavouring to make this a less frightening world by giving the public detailed accounts of how we are all gonna die, here are several easily attainable bombs for readers to feel safer worrying about. Or make.