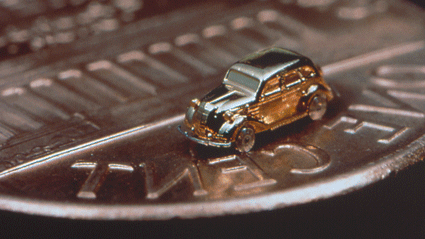 Hundreds of products currently on the market employ cutting-edge nanotechnology, yet no regulatory legislation exists in Canada or the U.S., and little to none in Europe.

Nanotechnology employs robots on the atomic scale to manipulate the building blocks of physical existence. In your laundry detergent, in your suntan lotion, in certain foods you eat, there are already countless miniature machines carrying out their assigned agenda.

Is there reason to be worried? Nanoscience, its corporate proponents promise, will change absolutely every aspect of our lives. To suggestions that fresh, relevant regulations might be needed the same scientists and CEOs shake their jowls with assurances that nanotechnology is no different from any other chemical process and the laws already in effect are adequate.

In March of this year in Germany, however, “Magic Nano Window Sealant” was pulled from shops just three days after its release when several people were hospitalised with breathing disorders after using the rubbery stuff. Within weeks 80 people were hacking up their lungs. Billions of inhaled tiny robots had been loosed in their bodies to fulfill their duties. By May those people had been rendered completely waterproof and when dropped out a ten-storey window bounced nearly 30 feet.

Meanwhile, researchers at Rice University in Houston, Texas, have created a working car, only four nanometres across. The cars roll along heated gold-atom highways on wheels composed of 60 carbon atoms. Rice scientists are working now on nanotrucks to deliver individual atoms to nanofactories. After the nanowhistle blows, nanoworkers will climb into their nanotrucks and nanomonstertrucks (this is, after all, Texas) and head to the A Little D ‘n’ A strip-bar to watch atom-o-peelers do the Dance of the Seven Valences and knock back frosty beer molecules.
The human mind struggles to picture such an infinitesimal milieu.

I’ll try to give the reader perspective in terms of zebras. A nanometre is one billionth of a metre, or a millionth of a millimetre. Microns are a millionth of a metre, so one micron equals 1000 nanometres. The diameter of a human hair is roughly ten microns. A Mountain Zebra from Namibia, Africa is around five feet high, eight feet long, and two and a half feet wide, covered in approximately 30,000,000 black and white hairs an inch in length. Using basic math, I calculate you would need… 7.5 × 10 to the 20th nanobots just to dress a zebra. The same number of zebras would be a herd larger than the known universe. Hopefully this clarifies.

Factories in our macro world will no longer need human workers or factories, since all production will be done in plants the size of nothingness. Thousands of nanofactories could fit in the period at the end of this sentence. Built from scratch, atom by atom, cars rolling off the production line will simply appear out of thin air. Restaurants will close because when people feel puckish, nanobots residing in their stomach will produce ham and cheese sandwiches on rye already digested. What happens when we shit out nanobots? Will they feel indignant and turn mean? Will hordes of disenfranchised, antisocial micronauts form vicious gangs in the sewers and come back looking for the asses that denied them a home?

Eventually the nanos won’t need us anymore. They can alter the elemental composition of matter with their bare hands, turning gold to lead or oxygen to chicken soup. They could just mass-produce themselves into blobs of unstoppable, all-powerful grey goo. Think about it: Roaring about in their monster trucks, devouring all the resources of the earth and regurgitating meaningless, high-tech crap, ignoring any culture that doesn’t come out of a petri dish and getting pissed on CH3Ch2OH-Lite every Friday night…

It is almost too horrible to imagine.