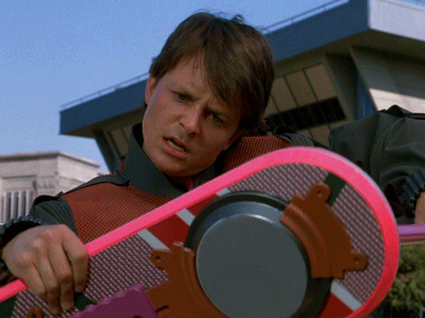 Flying cars are the new feet

Some day feet will be a novelty. Something found bobbing in soup in exotic restaurants. Zuppe de la Footsie. Certainly folks can’t be bothered using them to get around – even bicycles seem an unwarranted use of foot leather and calories, judging by the number of SUVs still selling. The fragile environment, however, suffers. So what’s the solution?

Leaping at an angles off tall buildings, of course! Ottobe Transportation (as in: “is this the future? It Ottobe!”) needs investors for a cable transit system strung from the tops of skyscrapers. Folks will buy licensed backpacks sprouting hooks, and then simply slide at incredible speeds to their destinations. From 60 stories one can travel five kilometers at 101 kmph. Nevermind the trouble of breathing in the rush of wind, or the tripled chill factor, or the slicing rain/snow/birds, what other problems might accompany attaching yourself to a metal wire hundreds of feet up in a region freckled with thunderstorms?
In sixteenth century China, Wan Hu, a minor official of the Ming Dynasty, supposedly built a chair arrayed with 47 rockets to fly to the moon. Earlier this year the science show Mythbusters demonstrated Wan Hu almost certainly exploded into ambitious dust, but since the myth doesn‘t appear in any Chinese literature until after American author Herbert Zim’s 1945 book Rockets and Jets containing the tale was translated and republished in China, it probably doesn’t matter.

The modern equivalent of Wan Hu is Larry Walters, a 33-year-old trucker from San Pedro, California. In 1982 Walters tied 45 six-foot-diameter helium balloons to his aluminum lawnchair and launched into the blue. He steered by leaning. Into the air space over Long Beach Municipal Airport. So… leaning doesn’t work so good without shoulders shaped like huge ping-pong paddles. At 16,000 feet it gets cold too, about -17ÂºC, so Larry killed balloons with his BB gun until he landed in a nest of high-tension power lines and blacked out the city.

Larry lived – but you don’t have to! Costing $324,000, the Moller Skycar M400 is a Vertical Take Off and Landing dunebuggy seating four and booking 380 mph. Folks think the yellow traffic light means “Aw, you’re special, YOU can keep going.” Now imagine you’re special at the speed of commercial airliners. And no traffic lights! Even better is the Solo Trek XFV exo-skelator flying vehicle. Two counter-rotating propellers strapped to your back fling you around at 80 mph. According to their website, helicopters for the masses would be dangerous, but these nifty
contraps are ideal.

At Tecnologia Aerospacial Mexicana, Juan Manuel Lozano Gallegos is busy perfecting his commercial rocket-powered backpack. Inventor, technician, “alchemist”, he does it all, but his buddy Ricardo pops round to help out part time. You can see Juan test out his jet pack at www.tecaeromex.com/ingles/video/vueloJM.mpg with a little help from the Lord and his laundry line. Of course, fueled by liquid hydrogen peroxide, there’s enough combustive power in those things to incinerate your house. Maybe Juan is the new Wan.

My invention beats the lot. Sugared Carrot Powered Transport. A network of narrow tunnels underground will have young donkeys stationed at each terminus. Commuters, doused with axle grease, a rope round their neck with the other end tied to the donkey’s ass, will pay a nickel. The toss of a carrot before a hungry donkey and you’re off! Recent tests have disappointed, with only heads reaching their destination, but that’s just a matter of needing better grease. Alternately a fleet of greyhounds could be employed, plus a rabbit, for rush hour. The world’s first hare-brained transit system. I’ll base myself in Surrey, like Ottobe. They understand the future there. Just look at the architecture.

Stuff To Read
www.ottobe.com, www.moller.com, www.tecaeromex.com. There’s great stuff about Wan Hu and other early rocket science at inventors.about.com/library/inventors/blrockethistory.htm. Admittedly, most hits for the Solo Trek XFV are dead articles, but see www.snopes.com/travel/airline/walters.asp for an hilarious account of the lawnchair Hindenburg.