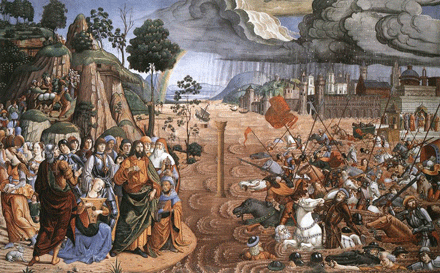 Global Warming! Our planet’s ecosystem is now committed to heat up 1.2ÂºC, with the consequent, inescapable, extinction of approximately a fifth of all species of life.

C02 and other greenhouse gases – emitted by cars, coal-burning electricity plants, and cow farts, to name a few culprits – are rapidly changing the delicate environmental tissue that surrounds, protects, and sustains us. In the last twenty years, North America alone has released more noxious gas than the previous two centuries of Industrial Revolution. Furthermore, the damage done so far is just the smog that accumulated before 1950.

On the upside, at the rate we’re going many of those species mentioned, living at the bottoms of oceans, in the remaining deeps of the Amazon, on my sandals, will be lost before we had a chance to discover them. Can’t miss what you never knew! The web of life is infinitely complex, but for simplicity we’ll take the example of coral. Coral reefs everywhere are bleaching bone white. Corals are actually two creatures getting homey together; coral polyps house and feed the algae growing on them, and the algae photosynthesise food for the polyps. At even a tiny increase of temperature, the algae can’t process sunlight. The coral is forced to jettison its partner, and then starves. Ever heard of the Great Barrier Reef? Not anymore. Sixty per cent of it is already dead. By the year 2050, at this rate, all coral in the world will be wiped out. About a quarter of all sea life spends at least some of its life cycle amongst coral and will be adversely affected. By 50 years later, the entire globe will have heated up an average of 3-5ÂºC (or more) and almost everything will be gone.

Respected research institutes have produced hundreds of studies detailing clearly the effects of global warming, and created computer models projecting our potential futures. None are good. Sometime between the years 2050 and 2100, there will no longer be any natural weather. All weather – including hurricanes, tsunamis, droughts, tornadoes, floods, hailstorms of frogs and blood – will be of human origin.

Buck up, pilgrims, here’s where the piece lightens up.
Solar power, transforming heat from the sun directly into voltage, has long been considered too wimpy to replace coal-pumped power plants. But no more! South African scientists, lead by U of Johannesburg prof Vivian Roberts, have perfected a solar panel system able to meet completely the needs of a modern house and store enough juice to last a dreary winter. The panel is a quarter the thickness of a human hair, and 1/70th of the old style solar panels. It works on any flexible surface, costs a fraction of the previous technology, and is vastly more efficient. The entire industry is literally stunned. German power company IFE Solar Systems has leased production rights, and plan to run their factories 24 hours a day to meet the first year’s advance orders of 500,000 units.

Meanwhile, in San Dimas, California, AC Propulsion has test driven the “Tzero”, a sporty little car that’s 100% electric. At 0-60 in 3.6 seconds, it out-accelerates Porsches, Ferraris, and even bitchin’ Corvettes. Plans have yet to be announced to include wicked detailing on the hoods. Tzeros can only cover 280-300 miles at 60mph before needing to fuel. For maximum efficiency, Tzeros are barren of the mod-con crap folks buy SUVs for. They cost $220,000. However, if some way could be found to make the Tzero an invincible concept (add an 8-track player, for instance), then demand would sky-rocket, and prices plummet. So, let’s put one and three together and see if we can’t make two plus two:

An IFE panel on a Tzero equals a shit-hot, street-worthy car, free to run, forever, with absolutely zero gas emissions of any kind.

A dodo could figure this one out. Will we? Scootch over, dodo. Make room on the extinction sofa.

Stuff To Read
The Weather Makers by Tim Flannery, Crimes Against Nature: How George Bush and His Corporate Pals are Plundering the Country and Hijacking Our Democracy by R.F Kennedy, Field Notes From a Catastrophe by Elizabeth Kolbert, Collapse: How Societies Choose to Fail or Succeed by Jared Diamond.
Also, Google “South Africa Solar Power Stunned” and “Tzero” or “World’s Fastest Electric Car”.