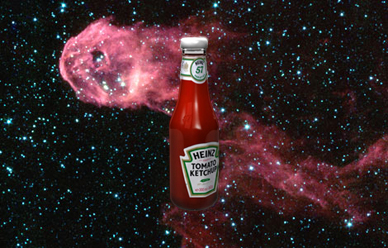 Time travel, a staple of science fiction and farfetched but ultimately attainable goal of several optimistic physicists in the world, is actually a daily occurrence. All you need to test this for yourself is a bottle of Heinz 57 and a lack of cleanliness or shame.

Einstein’s theories and formulations concerning time work equally well, mathematically anyway, going forwards or backwards, though the Second Law of Thermodynamics requires that entropy always expand. In other words, effects can never precede their cause, and messes only continue to get messier. The smashed ketchup bottle you dropped on the floor can’t suddenly leap back up on the table, whole and ready to not flow unless you whack it on the bottom again. Otherwise, the question of whether time is “real” has been debated by scientists and philosophers back to the days of the ancient Greeks, when ketchup was first invented as a healthier substitute to Hemlock gravy.

Time is not perceived in increments like seconds – that’s simply a convenient measurement to gauge and record the distance between events occurring. It is the mechanical process of neurons firing one after another, and the spark of thought and sensation jumping from brain cell to brain cell creates the mental illusion of a steady, unidirectional, forward streaming reality that seems fluid. Various entheogenic drugs such as peyote, marijuana, LSD and mushrooms can make time seem stretched, compressed or irrelevant, much like a Mariah Carey video. Accidentally watching Touch My Body may seem like hours passing, but when it’s over, the viewer, startled back to consciousness, wonders where the time went and why all they can think about is cleavage. Recent studies in Mental Chronometry, or one’s personal sense of time, suggest that perception can vary between cultures, age groups, states of emotion, and even in individuals otherwise in matching condition

John Cramer at the University of Washington attempted last year to split a photon – a single unit of light – into two slightly weaker halves. He then performed the ol’ wave-or-particle trick, in which, depending how you measure it, the photon either marks a photographic plate as a particle or gives off energy readings as a frequency. With subtle manipulation, Cramer caused the two “entangled” photons to have different results. Such a feat would suggest dickering with the notion of time, because the two measurements would send a “confirmation” of their respective results (“Hey! Guess what? We’re a wave!” “Really? I just found out we’re a particle…”) back through time to their initial source, before they were chopped in half. Stephen Hawking, scientist and monotone karaokelist called this hooey, though it sounded more like “hoy” shouted through a felt tube sock.

Hawking has somehow calculated the relative discrepancy in time perception between a six-month-old baby and a 40-year-old man living with his parents. The child’s ratio to one hour would be 1:4032 while the loser’s ratio would be 1:349,440. For the man, the hour seems slightly longer. For the parents, the hour is merely a pebble at the foot of a mountain of pebbles. Tough. They had condoms in ’68. This theory, meanwhile, contains – philosophically anyway – the nut of time travel. Because each individual experiences time at a different pace than his or her neighbour, if two people watch a third person knock a bottle of ketchup off a table, they will internally experience the bottle tumbling to the floor and exploding in tomatoey zestiness at minutely different time scales, and the difference between the two – one experiencing the event faster, the other slower – means in triangulation to the bottle actually landing, one will be slightly forward in the future and the other in the past. Then the waitresses, after watching three stoners flinging bottles on the floor for her to clean up, will punch them all into next week.