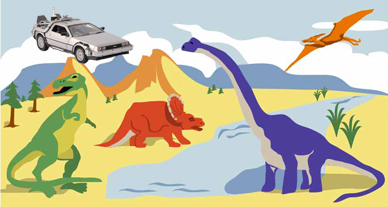 As far as we know, no person has ever time traveled. While physics states that traveling though time could be easily achieved by going faster than the speed of light, apparently that’s not as easy as it sounds – at least without the help of DMT. Even so, we all know lots about time travel. Our concept and understanding of the phenomenon has been shaped over the years, almost exclusively through books and movies. Rules have been set, conventions have been put in place, and the philosophical and physical realities that time travel functions within are well documented. With this in mind, we spent some time… um… coming up with what we believe to be a definitive rule on how time travel, if it ever were to exist, would ultimately have to live by.

Think about it. The grammar is correct, it’s just that when you are screwing with space and time, things get weird. Now ultimately the only real reason to time travel is to go back in time to fuck with or fix the present, which to you would be the past. The future depends on it. But time (as we perceive it) goes on from the present at every moment, and is continually running into the future, essentially determining it. But what if someone or something goes back in time and fucks with the past (which, to them, would be perceived as the present)? Basically, it fucks with the future.