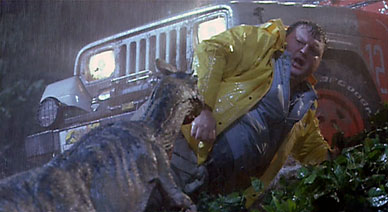 The Vancouver Parks Board is apparently considering the installation of 25 to 30 giant robotic dinosaurs at cash-strapped Stanley Park, predicting they’ll draw hundreds of thousands of paying tourists a year. Imagine! Stanley Park, cash-strapped! All those trees and rocks and bumpy green bits and flowers, and hardly a penny in its bank account. What kind of park doesn’t get a job and earn its way in the world? Does it think money grows on trees? Ingrate. Fortunately, wise technocrats appreciate the fact that even places of great natural beauty must be expected to make a profit, and animatronic dinosaurs are definitely the way to go.

Kokoro Dinosaurs are currently wowing audiences in their native Japan, Europe and the States, with touring exhibits of incredibly lifelike T-Rexes and demur spokeswomen which can respond to physical stimuli using the current apex of AI technology. In Britain there was recently a display of a 3/4 full scale Tyrannosaurus that its creators predict in a few years will be able to walk about freely, independent of hydraulics and supports. It cost about $500,000CAN to make. A full sized, independent one might then run between $750,000 and a million bucks, plus upkeep and enough robotic goats to keep it fed.

The movement of these animaltronics is uncanny, and the sense of advancing realism will surely progress. Hopefully they’ll one day come equipped with nuclear batteries like the Terminators, so that long after human beings have wiped themselves out, dinosaurs may once again roam the earth. With any luck the programming will go Westworldly, and we can all be treated to the awesome spectacle of seven story high lizards wandering off their circuit into parking lots, crushing cars full of their liquefied organic ancestors, eating the children and dogs left in the back seat while the parents are off at the casinos.

The Great Outdoors must sell itself for money, or the unthinkable might occur… wait, it isn’t selling itself for money?! Stupid, lazy Nature. In this frame of thinking, it makes perfect sense to spend millions installing giant electronic dinosaurs for the tourists to ogle where once we stingy locals relaxed in Vancouver’s limited sunshine. Humans are the new dinosaurs, and it would be remiss of us not to set up our own worthy successors before we vanish ourselves from the planet. Ladies and gentlemen, I give you… the New Humans! Raaawwrrr!