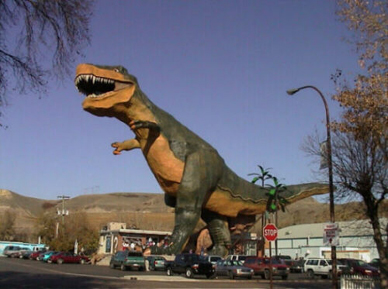 The first Creationist Museum/Amusement Park has opened in Midwestern America. Huzzah for the burgeoning field of Scientisticalness! The 60,000 foot complex, designed by a former Universal Studios Theme Park director, today welcomes the public and offers to install in them the truth of Intelligent Design over flimsy evolution theory, as only a theme park can.

The park claims to be in Cincinatti, Ohio, although their mailing address is in Hebron, Kentucky and their offices are in Petersburg, KY. A map is provided, and while they aren’t actually on it, patrons are assured the museum is within a day’s drive of 2/3 of the American populace. Please note, firearms and pets are not allowed inside, except for seeing-eye dogs and guns that only shoot bad people.

The $27M museum boasts “A fully engaging, sensory experience for guests. Murals and realistic scenery, computer-generated visual effects, over fifty exotic animals, life-sized people and dinosaur animatronics, and a special-effects theater complete with misty sea breezes and rumbling seats. These are just some of the impressive exhibits that everyone in your family will enjoy.” The animatronic dinosaurs also play banjos and sing songs for the kids about demanding their parents take them to eat pizza with extra cheese at the food court.

It’s wonderful to think human beings will allow the promise of sea breezes and rumbling seats attract them to an exhibit explaining the Grand Canyon must have been formed by the Great Flood because they’re both big. Never mind planting the conviction in people’s minds that a flood, of any degree, could etch such a chasm in just 40 days without simply sweeping away the entire landscape. Ah, but it’s God directing the current, isn’t it? So, that’s scientific. Geology, physics and common sense are the devil’s work anyway.

And dinosaurs! They’re all over the bible. They were there on the ark, next to the unicorns. Canaan was overflowing with sheep and velociraptors, but since all dinosaurs, the exhibit explains, were vegetarians, the ewes and lambies were safe. It wasn’t until the expulsion of Adam and Eve that any animal became a carnivore. Mind you, since all humanity came after Adam and Eve, by the time there was a Canaan, the velociraptors would be… carnivores, no? Presumably the exhibit will make a point of demonstrating how all those six-inch long, razor sharp teeth stuffing the gaping jaws of T-Rex were suitable for munching leaves. Given that the Bible is essentially an historical document, however, you’d think there would be some kind of record of them. Even in the Old Testament. Over the course of four thousand years of noting every minute event, every begetting, every expulsion and bar mitzvah, you would think the Jews might mention the gigantic, ground-shaking, tree devouring, shrieking and bellowing turkeylizards wandering all over the place. Just once.

“Eziah! How goes it then, in your beautiful lemon orchard?”

“Oy vey, don’t get me started already! Every day I go to fetch a couple lemons to make a nice cake with, and these farshtinkener brachiosauruses have eaten everything! But what can you do? If God gives you dinosaurs, get a knife and make boots!”

The $20 price of admission includes a ticket to the museum’s planetarium. There you get to see all the other flat planets of the infinite universe, and the sun, with a smiley face on it, orbiting the earth. I wonder if there will be animatronic angels in the heavens, and clouds, just out past Pluto, which is still a planet, where God lives. An animatronic God waving benevolently at the children, until the eyes light up, the mouth spits flame and the pointing finger crackles with electricity as He reminds them not to grow up homosexual. Ooh! And dragons! Let there be dragons too, please!

Overall, guests will “learn how to answer the attacks on the Bible’s authority in geology, biology, anthropology, cosmology, etc.,” although they will be left singularly unprepared to live in the actual world. The exhibit will focus on what are known as The 7 Cs of History: Creation, Corruption, Catastrophe, Confusion, Christ, Cross, Consummation. And, of course, Cash, which will be covered in the gift shop.