Thatâ€™s Not A Monkey On Your Back 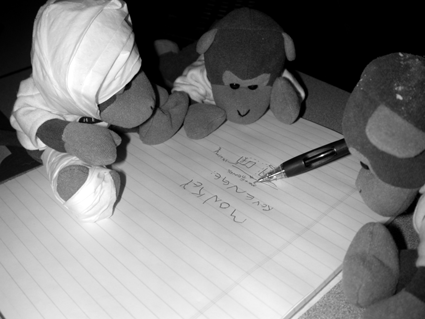 Dear Diary. White people and black people are different. White people live in Vancouver and Chinese people consider Chinese food to just be food. I think. Like if you were raised and born in one of the Chinese countries, no one there says, “Hey let’s go for some Chinese tonight.” No. Why would they say that? They probably just say “Hey, who wants to go and get some food to eat?” Right? “And what the hey, lets eat it with some sticks just because.” Those full-face sun visors they got are dope though. Megs has a theory that if you live downtown you mainly walk east-west and if you live in not downtown then you do more north-south maybe. Think about it.

Now stop. Watch. Is very Bling Bling. Look at that weirdo. Have you ever heard Reggae music? It hates Babylon big time.
Cam’ron’s Killa Season movie/DVD is now out and wow – it’s really pushing some cinematic boundaries in its flawless and brutally honest portrayal of what Cam’ron would do if he made a real bad ghetto movie that went nowhere. He’s official nice while the rest of us are Fisher Price. Also, maybe Cam’ron listens to Cam’ron too much. Though his other choices are listening to the guy named after the guy who invented poisoned Kool Aide or the guy who can only rhyme words with bandana. Canines film festival get ready for the Dips. No one else is ready. I’d really like to see Ebert and the new guy who’s not the dead guy sit through the three hours of your life that this movie takes from you. What would they think? Would they enjoy the scene where Cam’ron has mercy on a little girl and, instead of shooting her dead, he just spits on her? Do you like that, Ebert? How about the coke mule/pooping girls scene? Do you like that, Other Guy? And why does Cam’ron have that weird apostrophe in his name anyway?

What’s that? That’s craaaaaack. Professor X died a little while ago but don’t ever forget about X Clan. Wanna see a giant, maybe 17-feet tall, inflatable Westside hand? Then go see Ice Cube next time he comes here. ‘Cause he’s got one. Giant inflatable things are gangsta. Spare Rolex? Morning-after pills? It’s officially dice season. Four, five, six or back door L’il Joe. I went to the horse track last week and won $25.20 on Louie Downtown for the win and the show. All the other funny horse names I bet on lost. Inni Meeni Minimo and Sudden Carnage are dead to me. Dead like horses. When’s the last time you slapped into a 69? Ghostride your wife.

Ummm, hot dogs on Robson Street – still good. Did you ever notice that when it used to rain and you were on the Hastings bus going past the “party” district that the only people who had the umbrellas were the drug dealers? Also, remember when all the drug dealers had the same huge brown Rocawear hoodie from Army Navy? Speaking of which, Army Navy has a new shipment of ECKOS gear in, which is a hilarious bootleg of Ecko Unlimited. Mark Ecko (not his real name) recently proved himself to be an idiot by pretending to tag Air Force One in some sort of fake street cred scam. Chinese ladies who collect bottles and cans have street cred. Mark Ecko pees his pants and has wet dreams about being accepted. Mark Ecko needs one of those full-face sun visors that cover your full face. Chinese women wear them. Mark Ecko is the new Chinese woman and he’s a disgrace to everyone everywhere. Word to Met Life the IRS can suck my books. What does it mean when you get a letter that says your EI is exhausted? Does it just take a short break and come back? I love you I miss you.

Top 5 Songs Not to Put on a Love Jams Mix