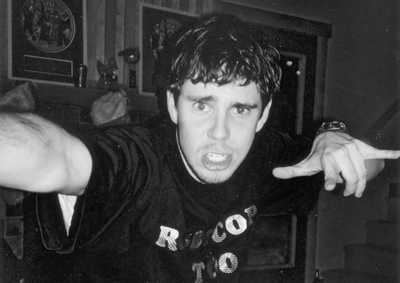 Canada’s own Drunkness Monster wants to be prime minister. The Halifax hip hop DJ (and former member of pop group Len) now goes by his birth name Mark McKay and started an internet show called ‘Happy Hour’ (videodrome.tv) that is a drunken assault on the senses. The show mixes fast cuts and television clips with live hip hop and explosive diatribes on Canadian politics and entertainment. Only talked with McKay moments after the Conservative party sewed up a strangely sober minority government.

Only: So you want to be prime minister?
MM: One day. I got this overall plan of running. My first step was this reality show put on by [multi-millionaire] Frank Stronach, [Liberal MP] Belinda’s father. I entered the contest and made the top 10 only to find out I got knocked out in semi finals. I don’t think they liked my answers to the questions too much. They asked me to identify with a political leader and I told them ‘Malcolm X and Martin Luther King.’ But they told me I had the best video they saw of all the contestants. So I really don’t understand how I’m not allowed to be part of the show.
Only: I guess it’s a good introduction to politics. The best candidates usually don’t win.
MM: I’ve been saying that for years since I ran for high school president and the teachers demanded a recall.
Only: But are you really thinking of getting into politics? You seem to have a lot of policies worked out.
MM: I’ve got a total plan for it. It’s based on the Ronald Reagan and Arnold Schwarzenegger approach. I plan to get my late night talk show off the ground and broadcast into the homes of millions of Canadians for the next 10 years. Let them know a little bit about who I am and bring myself into their life so when I go to run for prime minister they’ll know what I stand for.
Only: Who do you think will be your main competition in 10 years? You’ve said Ben Mulroney might have the same plan.
MM: (laughing) I thought about that. I’m a bit worried about [Mulroney] and Justin Trudeau. I guess it depends on how good of a campaign I run. I can take some pointers from Stephen Harper and smile a lot and keep my mouth shut.
Only: Where the hell did all the fast cuts and crazy clips in your show come from? It’s some kind of A.D.D. madness.
MM: The idea came from scratching. I’m a hip hop DJ, formally known as the Drunkness Monster. I’m putting in a little bit of flare to jazz it up. That and from watching a lot of Max Headroom as a kid. It’s all about pacing. As a DJ you know how long a song can play before people start to get bored with it or disinterested. Our attention spans are frivoling away to nothing, so we really got to keep the people listening and paying attention because I’m trying to pack in so much information.
Only: Where does the show go from here?
MM: I’m willing to take my time with it so long as I don’t starve to death because on the internet I can really get away with murder. I can say what I want, do what I want, use what I want and no one is coming after me. Hopefully, give it another year and it will be on TV.