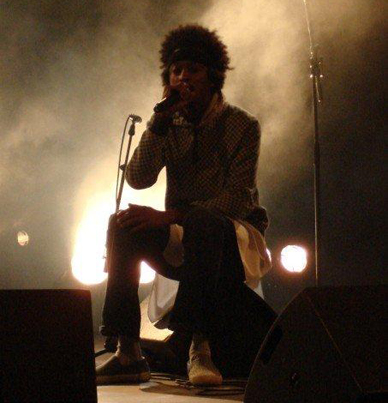 I like K’Naan. He’s true to himself and he makes original music which is something most Canadian rappers never learned themselves how to do. While he is nothing like The Roots, they both play with a live band and subsequently a lot of his (and their) fans fall into the hippie / college / white person category. But that’s not his (or their) fault Â­ he concentrates on just making his own music. So while some of us were busy being closed minded and shopping for Tims and Chucks, Damian Marley recognized the real and picked K’Naan up for his Jamrock world tour. Since then he’s been steadily touring which is why he was somewhere in Europe every time I tried to get at him. Due to a time zone difference that had me getting up too early (I like to party) and him not being in his hotel room, the phone interview failed repeatedly. In the end I had to just email my retarded questions to his manager (Sol Guy) who then asked my retarded questions to K’Naan. This is what got sent back to me:

ONLY: As a native Somalia rapper who grew up in Toronto, Canada Â­ how are you going to bring New York back and why are you never brought up in the “King of NY” debates?

K’NAAN: I think you are the first visionary who has ever interviewed me cause I don’t understand that either. For a long time I said I was the King of NY and also the King of Idaho. I now run shit in Idaho but I have yet to hear back from the King of NY committee.

ONLY: What are some fair, unfair and untrue Somalia stereotypes?

K: The fair stereotype is that we are all skinny. The unfair one is that we have the most beautiful women in the world – that’s way too much pressure. And one that’s untrue: Somalia is a peaceful country.

ONLY: Every time I type “Somalian” in my word document it suggests I change it to Somalia Â­ is this correct?

K: Yes your computer is actually smart. Somali language is not a Latin derivative so it can’t contain the “ian” thing. Also, you don’t call the French “Frenchians”.

ONLY: What is needed to alleviate the situations in Somalia today?

K: They need to carpet-bomb Somalia with ecstasy. That’s obviously the only solution for peace and sustainable development.

ONLY: Are white kids allowed to have dreadlocks?

K: Fucking good question. Yes they are, as long as every other sentence is not Jah Rastafari.

ONLY: What’s the deal with the guy who waves that big ass Jamaican flag on stage with Damian Marley throughout the entire show? Could you beat him up?

K: That’s Donavon. He’s a bad ass chef and that’s who you do not want to beat up when you’re on a seven week tour.

ONLY: You’re maybe labeled as a conscious emcee. Â­ How does that make you feel? Are you a vegetarian? Do you eat junk food?

K: I’m not an MC anything. I am a musician, conscious or whatever. I just like to make music. I’m not a vegetarian and I eat some junk food. I prefer pudding.

ONLY: Have you seen the hilarious Will Ferrell movie Blades Of Glory about the two male figure skaters that skate as a pairs team? Would Damien Marley’s flag guy like it?

K: Yes I’ve seen it and no, he wouldn’t, and for obvious reasons. [I think Jamaicans have some sort of code about men touching each other like that]

ONLY: Has the ease of illegally downloading music mp3s affected your career?

K: Yes, for the better too.

ONLY: I grew up in the Maritimes. In Nova Scotia there are a lot of charged emotions and clashes between natives and whites stemming from the fact that the natives have year round fishing rights because we stole their land and tried to genocide their race. Yet the poor whites have highly restrictive fishing limits due to the fact that Japanese trawlers have over fished our waters and depleted the cod stocks. So, do you like fishsticks?

K: You are insane! In fact fucked, what the hell kind of question is that?

ONLY: I’m a half-breed so I believe that race mingling is the key to preventing racism. Does your music appeal to all races?

K: All I know is that race mingling is also great after the shows.

ONLY: What’s your problem with Avocados [Google K-Os K’Naan beef]?

K: I’m not racist and I have white friends

ONLY: Since I only asked you retarded questions is there anything that I didn’t ask that you’d like to address?

K: Yes. An apple is fundamentally different from apple juice.

An edited version of this interview original appeared in Under Pressure #14
Thanks to Sol Guy. More on K’Naan here:
www.thedustyfoot.com
www.myspace.com/knaanmusic