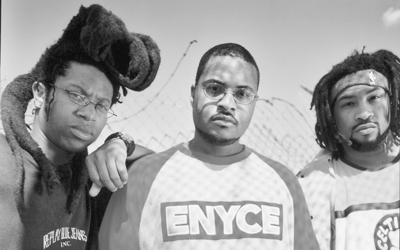 As far as cheesy names for white dudes go, you could do a lot worse than Chuck. But whatever. Black Dialogue is a great album, and Akrobatik is a sick MC, so I let shit slide.

ONLY: So I wanted to ask you one question man.
Akrobatik: Sure.
ONLY: On track nine, on Party Hard, I was listening to this last night and I hadn’t picked it up the first few times — you say “Dude my name is Chuck and I like to party hard.”
Ak: (starts cracking up) Oh yeah that’s right!
ONLY: “This guy’s one drink away from a spill / Ayo, brother needs some water…” Are you making fun of cheesy white dudes or what?
Ak: (laughs harder) Man I guess so. It’s more like a frat boy — like we kinda envisioned us just showin up at this crazy frat house with some crazy party goin on. So that was just like typical frat boy shit.
ONLY: I couldn’t believe that. Ripping on my name.
Ak: Sorry Chuck…
ONLY: I was reading an interview that you must have done before the album came out, and you said if people were expecting the next Public Enemy, then they’re looking in the wrong place. What are you doing different than Public Enemy?
Ak: Well, Public Enemy released about three classic albums…
ONLY: OK, but legacy aside.
Ak: As far as basic comparisons to the group, Lif and I are equal members in terms of the MCing. We share the load whereas Flav was the Jester. He’d do a solo song once in a while, but for the most part he was the hype-man. Our group doesn’t have a hype-man; it’s just two cats. That’s why the album’s called Black Dialogue — it’s a dialogue between the two of us on every song.
ONLY: There are those moments on the album, like at the beginning of Career Finders when it’s like you’re just chatting back and forth. You don’t really see that kind of collaboration often.
Ak: Oh true, true. See that stuff comes so natural to us that we don’t really realize it’s not around as much on other records. That’s just naturally how we write songs. If you’re gonna have more than one cat on a song they should interact with each other. And we do more straightforward shit as well, but even then we try to interact as much as we can. Like if I bust out a full verse Lif might just jump in for one little part.
ONLY: You can tell that it’s two people working together as opposed to just doing your own thing.
Ak: And that’s the whole point of dialogue: a conversation between two people.
ONLY: That’s definitely the definition of dialogue… The reason that I asked about Public Enemy earlier is that — and I’m not saying you guys are going down the same path or anything — but just like them you’ve got party jams carrying an underlying message. I know you’ve been hearing that a lot, but usually when you get hip-hop with some serious message it tends to be boring.
Ak: Right, cause cats are just pissed off and angry all the time. Yeah our main focus is to show that in this fucked up world you can be aware of all the things that are fucked up about it, but still have fun in spite of it.
ONLY: Yeah…
Ak: Ok man, well I hope you get a chance to come see the show cause as much fun as the CD is, I think the show is even twice as much fun.
ONLY: Yeah, but beware cause everyone up here’s stoned all the time so the crowd may not move around as much.
Ak: Well that’s OK. We’ll get stoned with them. (laughs) Take it where it goes.
ONLY: Word.
Ak: Alright Chuck, keep Partyin Hard.
ONLY: I will.