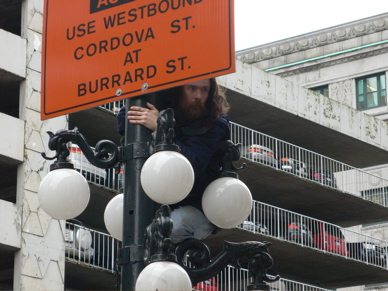 Russell climbs up poles for spare change. He is 42.

ONLY: Why do you climb up poles?

RUSSELL: I used to make really good money, but now the police department have told everybody not to give me money to climb poles. It’s not illegal, but if I had broken that light I could be charged with mischief. I used to do really well of Friday and Saturday nights, but now I don’t do very well.

ONLY: What do you do otherwise? Where do you live?

R: I used to play guitar. I live in the Downtown East Side.

ONLY: What is your favourite thing about Vancouver.

R: ...The disability. I have schizophrenia, so they pay my rent and give me some money. It runs out half way through though.

ONLY: What is your least favourite thing about Vancouver?

ONLY: If you could be doing anything right now, what would you be doing?

ONLY: Who are your guitar heroes?

R: It used to be Jimmy Page, but now it’s Jay Gilmour from Pink Floyd. He’s the greatest rock and roll guitar player I think.

ONLY: What’s your favourite Floyd album?

R: Um, it’s hard to say… The Wall. “Hey You” and “Comfortably Numb.” You know those songs? They have amazing guitar playing.

ONLY: Do you have any message for the people of Vancouver?

R: Yeah be careful about video, because there are evil people who are using computers to slander people and mislead people, and getting people to believe lies. So be careful of audio and video in this day and age.