Tom, waiting for a passport, 36 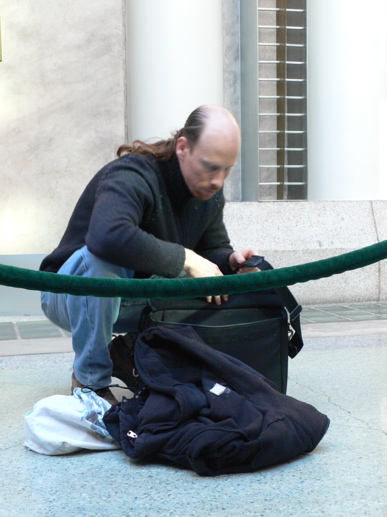 ONLY: Did you know that the line was going to be this
long?

Tom: No, I had no clue. I would have packed a lunch or
brought coffee or something. Even something to read
would have been nice.

ONLY: How have you been passing the time?

T: Well, I read the paper. Both papers.

T: Actually there was an article about how ridiculously
long the line has been to get a new passport. I wish they
had printed that yesterday or something, eh?

T: I’ve also got my PDA, so I’ve been able to send some
emails.

ONLY: What kind do you have? [Tom pulls out some
kind of Blackberry and shows it to me.] Nice.

T: It’s kept me sane in this line.

ONLY: You gonna get an iPhone?

ONLY: You don’t want–

T: God I don’t know. Hey do you think I can go down to
that A&W to get some food? Will you watch my spot?

ONLY: Yeah no problem. But hey, just answer some
more questions.

T: I don’t get this, though. What do you care about me?

ONLY: It’s like a guy on the street sort of deal. You
know?

T: Yeah yeah. So what do you want to know?

ONLY: Well, what did you have for breakfast?

T: I juiced. I juice for every breakfast, as often as I can
at least.