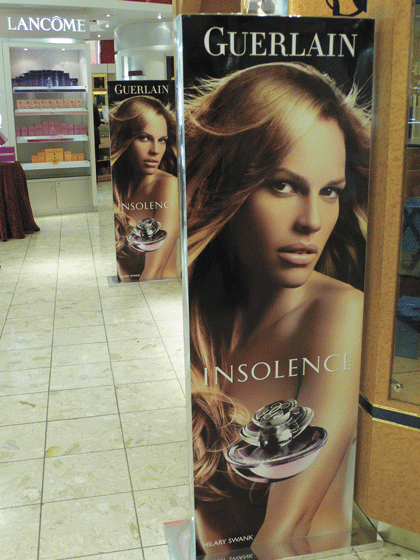 About a week ago I was in The Bay looking for some sheets, and I noticed all these posters announcing a new perfume called “Insolence” that Hilary Swank is the face of. A few days later I went and talked to the woman working at the Insolence counter and asked her how she felt about it. She was fairly candid, and in exchange requested anonymity. She was about 50.

ONLY: Have you ever seen any of Hilary Swank’s movies?
Saleswoman: I’ve seen Million Dollar Baby, which I rather liked.
ONLY: Don’t you think that she’s an odd choice for this sort of a thing?
Saleswoman: No I don’t think so. There are lots of fragrances now using celebrities as their spokesmodels. Chanel is using Nicole Kidman. And celebrities are even making their own fragrances. Sarah Jessica Parker is a great example of that.
ONLY: Fair enough. But okay, right next to you here is Lancome, and they’ve got Daria whats-her-face–
Saleswoman: Werbowy.
ONLY: Right. And I mean, she’s a total supermodel. She’s gorgeous, she’s young, whatever. And Sarah Jessica Parker? I don’t really think she’s that great, but at least she is sort of iconic with Sex and the City and everything. But Hilary Swank? She’s only been in two movies, and she looked like a dude in both of them.
Saleswoman: You don’t find her attractive otherwise?
ONLY: I find her horsey.
Saleswoman: Have you smelled the fragrance yet?
ONLY: Do you know the actual definition of insolence?
Saleswoman: I think in this case they’re using the word to inspire sexiness and empowerment–maybe an unattainable quality that women possess.
ONLY: It means arrogant and rude. And have you seen her husband? She’s definitely attainable.
Saleswoman: …It is a very odd name for a perfume.