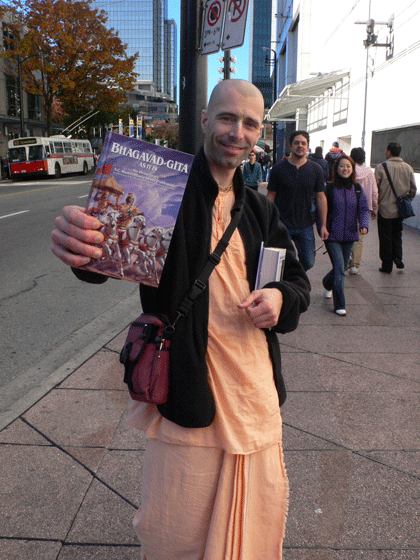 ONLY: What do you think is the best Halloween costume ever?
Neetai: The best Halloween costume I’ve ever heard of is someone dressing up as a Hare Krishna.
ONLY: Really? You wouldn’t find that offensive at all?
N: Ha ha. No, not at all.
ONLY: At what age did you stop trick-or-treating?
N: I can’t remember.
ONLY: Were you 13 or six or…
N: It’s not really a significant moment in my life.
ONLY: Well, at what age did you become a Hare Krishna?
N: I was 23.
ONLY: And how did that come about?
N: I met somebody who was a vegetarian–Hare Krishnas are vegetarian–and he was serving some vegetarian food at an event that I was at, and I was attracted to what they were cooking.
ONLY: So it was the food that initially attracted you to the religion.
N: Pretty much.
ONLY: So what are Hare Krishnas all about?
N: We’re into, like, chanting. Meditation and chanting. And mostly we chant the Hare Krishna mantra, which is, “Hare Krishna Hare Krishna Krishna Krishna Hare Hare Hare Rama Hare Rama Rama Rama Hare Hare,” and those are the names of God, so basically we’re into getting people to chant the name of God.
ONLY: Do you think that scary costumes or slutty costumes are better?
N: Um… Well I’m a monk, right? How do you think a monk would respond to that?
ONLY: I imagine you’d probably say neither. Maybe a pleasant costume?
N: Or maybe an inspirational one, like a Hare Krishna.