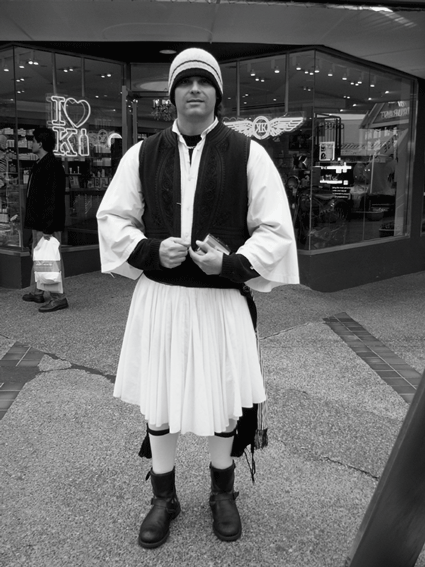 Edgar tries to lure people in to Kalypso — the Greek restaurant on Robson — by dressing in uniform and promising free homous or tzatziki with the purchase of an entree. He’s 28.

ONLY: Where are you from originally?
Edgar: Mexico.
ONLY: And why this job?
Edgar: I try to bring people inside. Try to talk to them, try to show the menu.
ONLY: Did you know the guys that own this place before you got the job?
Edgar: Yeah I’ve known them for almost six years.
ONLY: And what does the uniform represent?
Edgar: This is a traditional Greek costume. Military.
ONLY: What do you think about having to wear this kind of uniform for your job?
Edgar: Oh I don’t mind it. For people it’s very easy to recognise. A lot of people like it, and then they come to the restaurant. There’s a lot of restaurants around here.
ONLY: Did you ever see Fast Times at Ridgemont High?
Edgar: No.
ONLY: When Brad gets fired from All American Burger and has to take that job where he has to dress up as a pirate?
Edgar: No, but I like this kind of a job. You can meet a lot of people – different kinds of people. You get to meet actors and meet friends. It’s nice. And I can practice my English, which is good for me.
ONLY: Do you like bubble tea?
Edgar: Yeah.
ONLY: What’s your favourite flavour?
Edgar: Um… Green tea.
ONLY: Yeah I like the green tea too. I just had one. I’m full of pearls.
Edgar: I like it it’s so good. I’m waiting for summer to start buying them.
ONLY: You ever drink mango nectar?
Edgar: No.
ONLY: Oh I’m hooked on it these days. If you like mangos…
Edgar: I’m going to try it then.