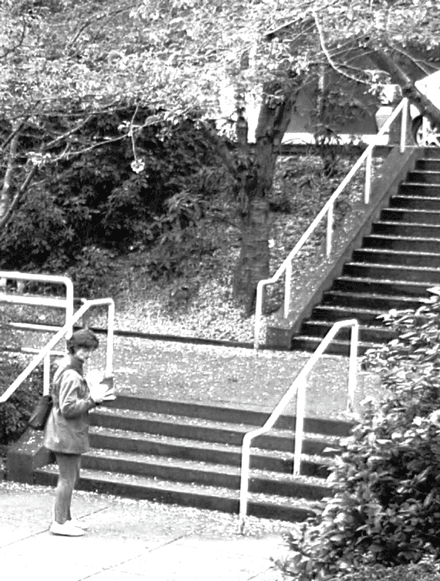 Elaine was handing out pamphlets filled with her beliefs at The Burrard SkyTrain Station. She’s 47.

ONLY: What is your message?
Elaine: Well it’s basically – there’s a situation that’s come about in the Catholic Church within the past thirty to forty years that was made during the 1960s at Vatican II that has made substantial changes. These changes were presented as prudential renovations, which they were not. They were basically an invasion – an occupation of the church by international socialism. The same thing that is happening to Iraq right now is the same thing that’s happened to, you know, most of Eastern Europe.
ONLY: The same thing that’s happening in Iraq…
Elaine: In Iraq they went in with armies and guns. With the Catholic Church – because it’s a world-wide multicultural entity, and a benign entity that doesn’t mean harm to anybody… um… In France we had the French Revolution which was presented by historians as a civil war, but if you read the documents of the Church and the writing of the Popes at the time, you see that it was actually a revolutionary – or a Masonic… Freemasonry is the–
Only: So this goes back to the Freemasons?
Elaine: Yes. And that’s basically the power that’s behind what’s going on in the Church right now. And the Papal condemnations of Freemasonry are so severe and sweeping that they are unique in the history of the Church. The Catholic Church doesn’t really condemn anybody unless there’s a good reason for it.
ONLY: But they condemned the Freemasons.
Elaine: Yes. The agenda of Freemasonry is to destroy the Catholic Church. It is to Catholicism what Nazism is to Jews.
ONLY: Why isn’t that getting more publicity or coverage in the media right now?
Elaine: Because they run the media.
ONLY: The Freemasons do?
Elaine: Yes.
ONLY: Oh wow.
Elaine: The international media. And they’re behind the new world order. I’ve got all kinds of documentation to back up what I’m saying.
ONLY: Hence the pamphlet.
Elaine: Well, yeah.