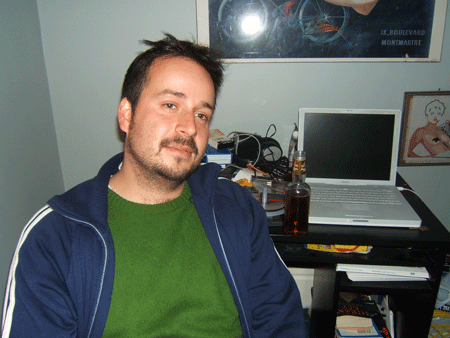 Max Stockholder is a chef.

One day I got an email from someone I’d never met before promising me that if I came to his house he would make me the best meal I’ve ever had in my life. So I went. And it was. And he served that amazing meal to a house party full of people. It was rad because most of the people at the party didn’t know each other, so we all spent the night making friends. It ended up as this big Strathcona Missy Elliot dance party.

ONLY: What kind of parties are you into?
Max Stockholder: I’m into smaller parties. This is about the right size party. About 30 people.
ONLY: Do you cook for this many people very often?
M: This is the first time I’ve ever done anything this large.
ONLY: Was it a big challenge?
M: It was more scary than anything. I was scared that I was going to run out of food. And I did.
ONLY: What? There’s like a flock’s worth of duck in the kitchen still.
M: Yeah there’s lots of meat, but I ran out of vegetables. Which my mother would not approve of.
ONLY: Neither would mine. Are you a tit man or an ass man?
M: I’m an ass man.
ONLY: Where do you work?
M: I work at Pacific Crab Company
ONLY: And you play music?
M: Yes, but I haven’t played a show in about 4 years. I used to play with Hank and Lily sometimes.
ONLY: What kind of music do you play?
M: I’ve been wanting to play some Vaudeville-type stuff.
ONLY: That’s cool. It might work with the whole Burlesque thing that people are super into right now.
M: Yeah. I like Burlesque shows. Not the ones at big clubs, but if it’s a small venue or a house…
ONLY: Are there Burlesque house shows?
M: Oh, yeah. There’s a place down the street. A lot of them are all-lesbian though.
ONLY: Do they let you in?
M: Very rarely. Although I bartended at one once.
ONLY: You should just show up with some of the homemade blueberry ice cream that your neighbours were telling me about.
M: (Laughs) That’s true. I’m kind of one of the girls.