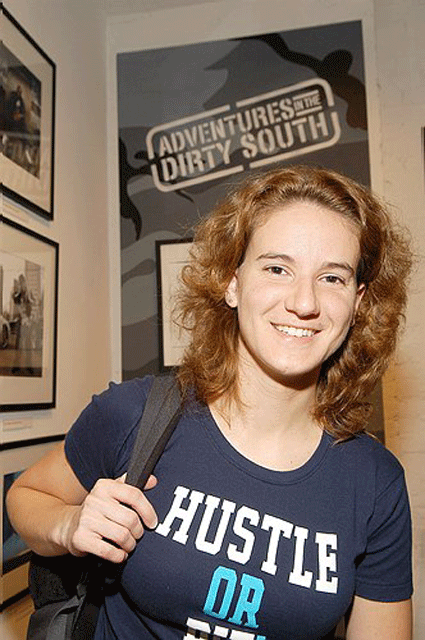 Julia is the publisher/editor of Ozone magazine. it’s from Orlando and, aside from Murder Dog, it’s the only rap magazine worth reading. She’s 24.

Only: You just got on news stands this year?

Julia: February was our first official news stand issue. We’ve had limited distribution for the past nine or ten months, but we officially signed a deal with one of the largest distributors in the country.

O: And you’re all about southern rap?

JB: Yeah we focus on southern rap, but as our audience grows we have to grow with it. But I think we just try to focus on artists that other magazines maybe overlook. A lot of the magazines are based in New York, so they’re very New York centric, and very focused on what’s happening there. And that’s cool, but there’s a whole other world out there.

O: Is there anything worthwhile coming out of New York right now?

JB: I don’t know if worthwhile would be the right word for it. Me personally, I’m really not into that style of music. I think its all ‘bout your personal preference. A lot of people might say southern rap is not hip-hop. That’s just their opinion. I’m sure there’s music in New York that people who are into that type of music are gonna listen to, but for whatever reason, if there is worthwhile stuff, it’s just not getting out to the people.

O: Did you get frustrated with that Lil Wayne interview?

JB: Yeah he was a dick! Every time I’ve met him or interviewed him he seems real hot and cold. So maybe he was in a bad mood. Interviewing people is interesting, ‘cause there’s always gonna be certain people, certain artists you just don’t click with, or have that rapport.

O: You do almost all the interviews in the magazine.

JB: Most of the time it’s just easier that way. Instead of assigning it to someone and waiting two weeks, I can just call someone on the phone, type it as I talk to them ‘cause I type like 100 words a minute, and then it’s done in 20 minutes. But I’m trying to turn over a lot of that to other people. But at the same time, if you want something done right you gotta do it yourself. I don’t think I’ll be interviewing Lil Wayne next time though.