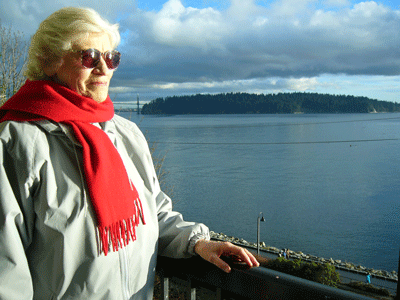 
Only: How many vitamins do you take every day?

Edna: A lot. I don’t count them, but they all have a purpose. This is selenium for anti-cancer. This is additional vitamin A. I’ve taken two thirds of my daily vitamins already.

O: So about forty a day?

E: Oh I guess. I’ll count them some time. This is glucosamine. This is MSM for keeping your joints pain free. This is calcium. When you get older, your body doesn’t produce this stuff anymore. I remember when I turned forty. I was driving along the upper levels, and I looked in the mirror, and I remember my neck had just started to wrinkle. That’s when I knew I was getting older.

O: Why did you first decide to learn about psychology?

E: I was finishing my first degree, and I was learning psychology, but I wasn’t impressed with it. I really wasn’t. But I finished it, and I was teaching, and I had four children. And then in ’69, Rudolph Drykers came and spoke at UBC. And he was talking about an approach that gave some value to position in the family, which I had just experienced with having my own family. It just made so much sense, and I wanted to learn more. So after that, twelve of us started getting together every week for an entire year, and discussed Adlerian Psychology. We read books, discussed them, and then we would go back to our regular jobs.

O: And what fascinated you most about it?

E: Well I was seeing it reflected in my own family, and I was able to apply it in school counseling, and help parents who were having difficulties with their children.

O: But your family was on the way to having grown up by the time you were learning about Adler.

E: They had grown up, but became quite influenced by it. It just made so much sense.

O: Was Rosemary [her second child] still giving you a lot of trouble at the time?

O: Is that one of the reasons that learning about this was so appealing?

E: Yes. I wouldn’t have been doing what I was doing if it hadn’t been for her.

E: Because I tried my very best with her, and I didn’t know where she went wrong. But once I began to learn Adler’s principles — the family constellation — it all made sense. Children are marvelous observers, but poor
interpreters.