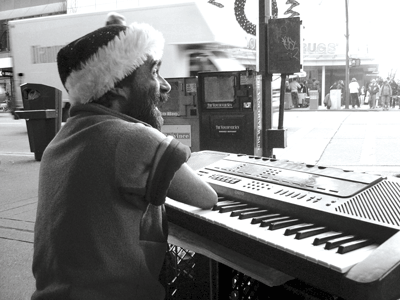 Mark plays piano on the corner of Georgia and Granville almost every day, and is the most enthusiastic man ever. He wanted me to tell everyone to “keep the faith.” He’s in his mid-late thirties.

Only: How often do you come out here?

Mark: Well I’ve been doing this sort of scene for about twenty years. I have worked in the past in radio, government, the last job I had for seven years was for Bell Canada. But welcome to the zeros! I was downsized, pardon the pun. So… sometimes playing the music is a backup income. Unfortunately or fortunately, depending on your viewpoint, for the last while it’s been a primary income. I actually live in London, Ontario. It’s pretty scary. They have something called snow. Lots of it! So what I’ve been doing for the last ten years or so is come out west – usually October/November, and then I go back out east in March/April. I also have three daughters: Jessica who is soon to be 17, Stephanie who is 15, and Brooke who is five.

O: Do they all live in Ontario?

M: Yeah they all live in London, they all live with Mum. Mum and I have been separated for a little while, so they stay with her.

O: How do you get out here then?

M: I fly. It’s real hard on the arms after a while.

O: Do you have just loads of those kinds of jokes on tap?

M: Oh yeah yeah! Shit man, you’ve got to. You have to adapt. I mean, I was born as a four-way amputee. I had some work done on what I used to have as undeveloped elbows. They were surgically removed about twenty years ago. But basically I was born with shortened limbs above the knee and above the elbow. I used to draw and I used to paint. Not such a good income. You have to be dead for a painter to be recognized, and I can’t really afford that. So I switched format and started playing music. I’ve never had any formal training. I used to play by ear–it’s not as painful anymore.