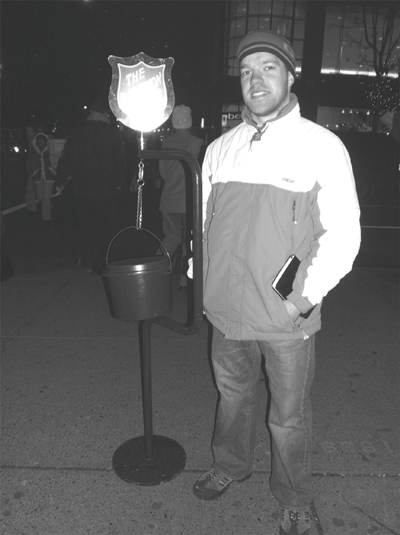 Only: Where are you from originally?

O: When did you move here?

D: I came here in February of this year.

O: So you don’t do this every year?

D: The Salvation Army does, but I never have. We do have
similar fundraising efforts in Australia over Christmas, but in terms of standing on a street corner singing my heart out….

O: Do you sing the same song all day?

O: Does that one make the most money?

D: It seems to. I don’t know why. Maybe it sounds nice, but it seems to get more money than the others.

O: Are people being pretty generous, or do you think they’re not really in the Christmas spirit yet?

O: Is there a time where you’re gonna start wearing the Santa outfit?

D: I think I might whip it out in the next couple days.

O: Have they given you one?

D: No, but I personally invested in my own Santa outfit for the cause.