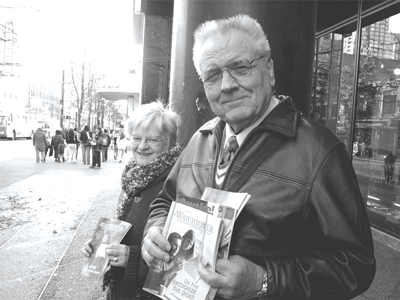 John and his wife Betty are Jehovah’s Witnesses. He’s in his sixties, and she’s in her fifties.

Only: What is going on right now that Jehovah’s witnesses are concerned with?
John: According to The Bible’s prophecies we are, right now, living in what probably could be termed the last days of the last days … We don’t know the day or the hour, but we know the season. Jesus said that we would know the season.
O: What is the season?
J: The last days. We are close to the end of the last days. Which is actually good news.
O: Really? Sounds pretty scary to me.
J: Well a lot of people have reason to fear the last days. But for those that are on God’s side, it actually means the beginning of a whole new system of things. And so, for those who are on Jehovah’s side, the end of days means that we’re very soon going to be back in that paradise situation.
O: That is exciting. But what happens to the rest of us? I’d say I’m not on his side.
J: This is what this work is all about. A kingdom is a form of government, and it’s Jehovah’s government, this kingdom that is going to re-establish that paradise. It’s already at work right now on the earth. We have an organization today that is unique among all organizations — there are about six million proclaimers of that kingdom in the world right now in 210 different lands. We are an organization united in a brotherhood. We don’t vote or join armies.
O: You don’t vote?
J: No Jehovah’s Witness will ever vote. We are neutral. We already are subjects of a government.
O: The greater government.
J: That’s right. And so we are ambassadors for that government. Just the same way an ambassador from England wouldn’t vote in our affairs here.
O: So you are citizens of-
J: We’re citizens of every country in the world.