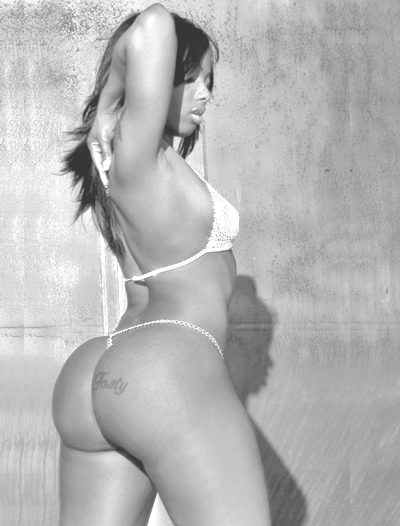 Buffie The Body’s measurements are 34-27-45 (honestly check out www.buffiethebody.com cause this shit is insane). She wouldn’t give her age because “a lady never tells.”

Only: I noticed that — and I don’t know the right word for this exactly — but big booty modeling is becoming a much bigger thing right now.

Buffie: Yeah, I think that everybody wants the bigger girls. The skinny girls are going out of style, and everyone wants a bigger booty now. And I swear I get just as much mail from girls as I do from guys, asking me how they can get their booty’s bigger. Is there a special diet? How to work out –

O: Is there anything that girls can do?

B: To be honest, you have to be born with it. I mean, I guess you can get implants now, and I seen some girls get that –
O: Oh, that’s gross.

B: But you can tell if it’s fake. You gotta be natural, that’s all there is to it.

O: Well of course, that’s the best way for everything. Um, what do you attribute the big butt movement to? Why is this happening now?

B: Guys have always liked big butts. ALWAYS — white guys, black guys, everybody. Maybe before it wasn’t cool to admit it, or guys were scared to say they liked them. Everybody! And I remember a time when white girls used to see my butt and they’d say it was so big and so gross. They used to hate it!

B: Now, they want a butt. Everybody wants a butt now.

O: Well, then I guess you’re pretty fortunate to be having it at the right moment.

B: (laughs) I know, and I don’t think it’ll ever go out of style. I don’t think big butts are in style just this year and next year something different. I think it’s here to stay.