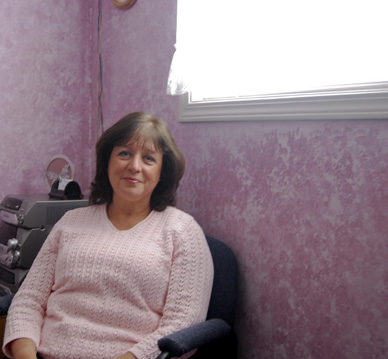 Anne Larson is a clairvoyant.

ONLY: Do you think it’s possible to time travel?

Anne: I as such don’t believe in time travel, it would be how you define it. I believe that everyone is capable of astral travel. It really isn’t that time involved, it’s more travel involved. I have been known to purposefully leave my body and go and visit friends’ homes, been aware of what’s going on in their homes, leave some kind of indication that I was there and then come back and re-enter my body. So yes, it is possible, but when we’re talking about something like this we’re talking about the spirit. Time is man-made.

ONLY: But technically, if you can have out of body experiences, can’t you travel into the future or the past?

A: The mind can, but we don’t actually move. What we’re doing is going back into memories. And that doesn’t necessarily mean memories from just this lifetime. As far as the future goes, we can’t foresee the future. In fact, in Canada there is still a criminal code and the witchcraft act that we can be put in prison for trying to foretell the future. It was just removed a few years ago in England, and none of us have gotten together to remove it here. Clairvoyantly, you may be given glimpses of something to come in the near future, I would say up to a couple years ahead. If a person continues on the path that they’re on right now, this is a possible ending. We can’t see the future because it’s yours to create.

ONLY: What are your thoughts on drug-induced out of body experiences, like with peyote spirit quests?

A: It’s very dangerous, because what you are doing is altering the chemistry in your body. You don’t know how much is hallucination, how much is your mind and how much is your higher self. I would say on the other hand that when you do some of this work, you do get a kind of high because you go into such a calm beautiful state. You don’t need drugs.

ONLY: How does the whole process of astral projecting work, and how do you go about learning to do it?

A: For everyone it’s a little different, but basically you have to be consciously able to put your body into a relaxed state and then with the education or evolution of your spirit, you can remove yourself from the physical.

ONLY: Are there any dangers to astral projecting?

A: There are some pitfalls. Number one, if you don’t know what you’re doing, you may have trouble getting back into your body properly. Once many years ago I had the experience of waking up from a sleep, realizing that I wasn’t in my body and not being able to get back in. There was a problem; someone else was occupying it. So that’s very rare. Possession or obsession is fairly uncommon, but there is that potential. And if you’re dabbling in something you don’t understand, it’s like driving a car without a license.

ONLY: Theoretically, if scientists did create a time machine, do you think it would be a good idea or a bad one?

A: Why do we want to time travel? We’re here to experience this lifetime and even if we were able to time travel, how far ahead do we want to go? Even in the sci-fi movies that you see, people don’t adapt to living a different time. Even moving to a different country is very difficult. There would be no benefit because it’s the here and now that’s most important for the growth of the soul.