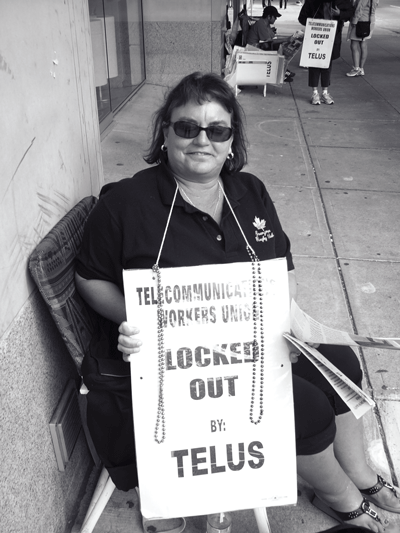 Janet is 46. She is a Telus Picketer.

( I really wanted to chat with one of those high-class hookers that hang out on Seymour St. for this issue, but I went down there the other night and none of them were into it. I even offered them some cash, but all I got was “fuck off.” So the next day I went up the street to the Telus building, and asked Janet the same questions I would have asked one of those whores.)

Only: How long have you been working the streets?
Janet: We’ve been out here for seven weeks.
O: Do you experience much harassment from the locals?
J: No, we get a lot of support from the people that walk by. I would say 95 percent of the people that walk by give us encouragement, thumbs up, smile, ask us questions. And the ones that harass us are usually the nutters. The looney tunes. The ones without a brain in their head.
O: Did you ever imagine that you’d be doing this with your life?
J: No. It hurts me. Horribly. I’m a huge optimist, and I’ve been watching these proceedings for four and a half years, and I never ever thought it would get to this. I’m shocked.
O: Do you think that your customers are repulsed by scabs?
J: Yeah I think they are. By and large most of our customers understand that Telus is more interested in the bottom line than giving good customer service. They realize that we bend over backwards and have a lot of expertise in what we do, and they also know that this dispute is not about money. It’s about job security and keeping jobs in Canada.
O: What do you think of Robert Dayton?
J: Who?