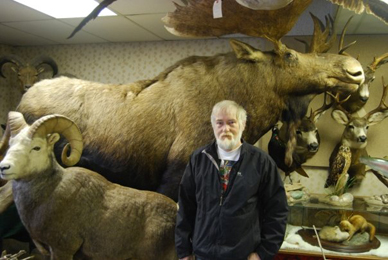 Frank Gilbert is a Taxidermist. He is 60.

ONLY: How long have you been into taxidermy?

ONLY: How did you get into it in the first place?

F: I just had a total interest in wildlife and. It’s the love of my life doing this work.

ONLY: What’s your favorite animal you’ve ever worked on?

F: I can’t say I have a favorite, I enjoy them all. They’re individual animals and each one gets its amount of time required.

ONLY: Are there any animals you’d like to work on that you haven’t yet?

F: I like the big cats, those I’d like to do. There are some big sheep from around the world that I’d like to work with.

ONLY: Where do you get your ideas and inspiration?

F: A lot of thinking, looking at pictures, studying animals when I’m out hunting or whatever. You get an idea of the animal’s attitudes expressions and whatnot and you try to portray them.

ONLY: What’s the hardest animal to work on?

F: Something that’s badly beat up. We get a lot of road kill, birds and whatnot and some of them are pretty difficult to do. I think everything has its quirks, I wouldn’t say there is anything that’s more difficult than others, just more time consuming and bigger.

ONLY: I heard about something called rogue taxidermy, where they make mythical animals out of a mix of animal parts, what do you think about that?

F: I’m not one who really goes in for that kind of thing. I’ve not done it, I like the animals for what they are and try to portray them that way.

ONLY: Do you listen to music while you’re working?

F: Mostly I listen to talk radio. It keeps me thinking.