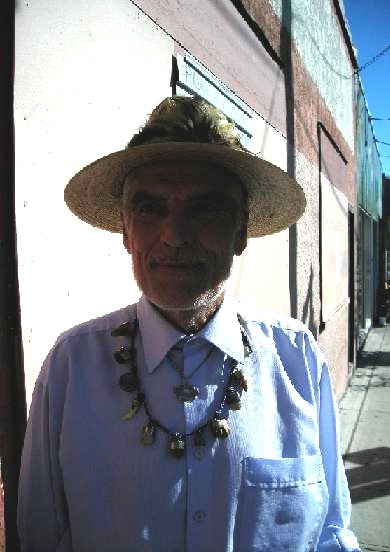 Jacques Was Selling Books on the Sidewalk on Commercial Drive. He is 70.

ONLY: What is your name?

JAQUES: Jacques Alexandre Michel Cote-DeVille. DeVille because I am a duke. A French duke.

ONLY: You’re a French Duke? What does that mean exactly?

J: Well, what does that mean? I am related to the King of France, Louis XVI. Because my ancestor, she was the sister of Louis XVI. But she has been guillotined, you know that, yeah?

ONLY: Okay, so you’re sort of like royalty then?

J: Yes, yes, but I don’t care about that, you know. I am human being like you, like everyone else!

ONLY: Have you gotten any benefits through that of any kind?

J: Yes, I have got some benefit because I got back the castle from my ancestor–my son is an architect and he’s taking care of it. And I work a few years in Dubai–maybe you know Dubai?

J: I worked there and I bought my own castle, but small one.

ONLY: What do you do now then?

J: Now you can see me I am selling a few things I have because I am cleaning my apartment and things like that. But I have my own office. You know that sometime [movies] need somebody for languages? When actors they don’t speak it, and they have to say something in French? That is what I do, once in a while.

ONLY: What languages do you speak?

J: OK, firstly I speak Arabic, because I was born in an Arabic country. I speak Italian, Spanish, French, English, and German.

ONLY: Do you want to give a message to Vancouver in Arabic?

ONLY: Any other language?

J: Je pense que Vancouver–j’espere que ca sera mieux dans le futur, qu’il y aura moins de crimes, et que what we need is love, compassion, peace, is what I am for, you know? Because I am for Greenpeace, I don’t know you, but I love Greenpeace. I am for peace, for love, things like that, compassion, and, is what I do, you know? Yeah. The most important in life is love and compassion, you know right?